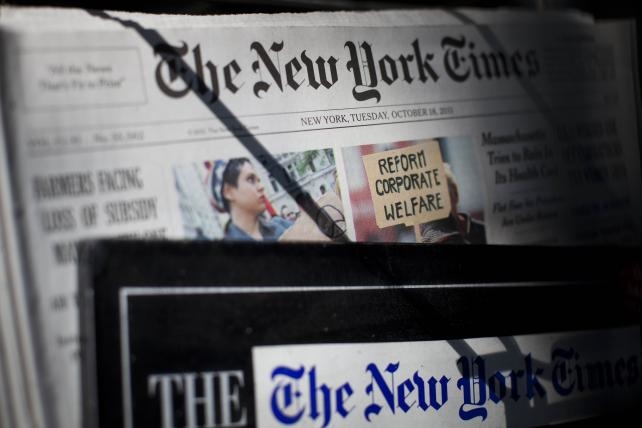 At least 85 New York Times employees applied for voluntary buyouts by yesterday's deadline, falling short of the number the newspaper publisher said was needed to avoid firings, according to a union representative.

Grant Glickson, the chairman of the New York Times unit of the Newspaper Guild of New York, said in a phone interview yesterday that 62 guild members and at least 23 non-union employees that he knows of had applied by yesterday's deadline, which was 5 p.m. New York time. At least 31 guild members have been approved for the buyouts so far, he said.

New York Times Co. has said there will be forced cuts if about 100 jobs can't be eliminated through buyouts, as digital businesses have struggled to make up for declines in print. Glickson said the number of job cuts could fluctuate based on the salaries of those who applied for buyouts. He estimated that 15 to 25 people may be fired based on the projected shortfall, the likelihood of the company denying some buyout requests and the probability that some employees will rescind their applications.

Like many newspapers, the Times is trying transform itself into a digital newsroom as more readers get their news from the Internet and as print circulation and advertising decline. The publisher said in a regulatory filing in October that the staff cuts "are necessary to control our costs and to allow us to continue to invest in the digital future of The New York Times."