The New York Times Co. CEO Janet Robinson is stepping down at the end of December, ending a 28-year career at the company and a seven-year run as CEO.

The decision was Ms. Robinson's, according to a staff memo from Chairman Arthur Sulzberger Jr., who will become interim CEO as the search for a successor begins.

"Under her leadership at the paper, and later our entire company, we have successfully transitioned to a multiplatform organization, and we have found new ways to reach new audiences, monetize content and stabilize our balance sheet during an uneven economy," Mr. Sulzberger wrote. "We did this without compromising the quality of our news and information we provide readers."

The company will pay Ms. Robinson $4.5 million to serve as a consultant next year. That arrangement struck some observers as a way to smooth Ms. Robinson's exit, part of an effort by the board of directors to secure a change in direction at the top.

The abrupt notice shocked many observers.

"It's an interesting thing, because when you reflect back on the way things customarily worked at The New York Times Co., succession is fairly well-planned," said Alan Mutter, the newspaper veteran turned Silicon Alley entrepreneur and newspaper blogger. "So there seems to be a sense of urgency about it. We don't know what that means."

Announcing the CEO's exit two weeks ahead with no successor in place is surprising, said publishing analyst Douglas Arthur, managing director at Evercore. "They're initiating a search for a new CEO, so this is very sudden. I am perplexed."

The move also comes five weeks after The Times Co. said longtime digital chief Martin Nisenholtz would leave at year's end, while the flagship paper's online pay meter was still in its infancy and his effort to turn the company's About.com division around was barely off the ground.

The company has decided not to name a successor to Mr. Nisenholtz, a spokesman said today.

The Times' pay meter is up and running ahead of expectations, so if there was going to be a change at the top perhaps this was a natural time, Mr. Arthur offered. "But clearly this is sudden and unexpected," he said. "You can't look at it any other way."

Ms. Robinson's tenure coincided with huge challenges to the newspaper business, not least of them the collapse of the classified ad revenue that had long supported fat profits and big newsrooms. "This was not a period of time for her or anyone else who was a CEO of a newspaper company, or for that matter CEO of any media company, to come out a complete hero," Mr. Mutter said. 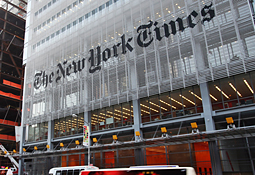 The Times Co. had to sell most of its new headquarters in 2009.

"The real question is how well did you muddle," he added.

The Times Co. dealt with a liquidity crunch by borrowing $250 million from Mexican billionaire Carlos Slim at high rates, but eventually paid him back early. It installed the pay meter at The Times Online to some criticism and skepticism, but had accumulated 324,000 paying digital subscribers by the end of September -- including subscribers on e-readers such as Amazon's Kindle -- up from 281,000 at the end of June.

While the Times paper itself has retained its stature and much of its staffing, the rest of the company hasn't fared as well, Mr. Mutter said. "If the mission of the company was to see to the health of The New York Times at all costs, I would say she did pretty well. When you talk about the need to muddle, I would say she's muddled as well as other CEOs in a very, very difficult time."

Ms. Robinson deserves more credit than she gets for pulling the company through the recession, said Ken Doctor, media analyst for Outsell. "They were on a tightrope, they had to sell off the majority of the headquarters building and take Carlos Slim's high-interest money," he said. "They did what they needed to do to get through the recession, and it was very painful."

"In 2011 I think they are the most successful American newspaper company at taking advantage of the new landscape," Mr. Doctor said. The company priced its pay meter, for example, so it was cheaper to get weekend home delivery of the print paper -- receiving unfettered digital access in the process -- than to drop print entirely and subscribe to digital access alone, he said. That led to The Times' first Sunday home-delivery increase in five years this fall.

The company lags competitors like The Wall Street Journal and NPR, however, in taking advantage of Facebook, Mr. Doctor said.

Ms. Robinson said in a staff memo that she was leaving with mixed emotions. "The company has been my home for 28 years, and I am grateful to have had the opportunity to work with so many outstanding professionals over the years," she wrote. "At the same time, the company's course is set and I am excited by new opportunities that await me."

Asked about the timing of Ms. Robinson's departure, a Times Co. spokesman said the company had nothing to add now.