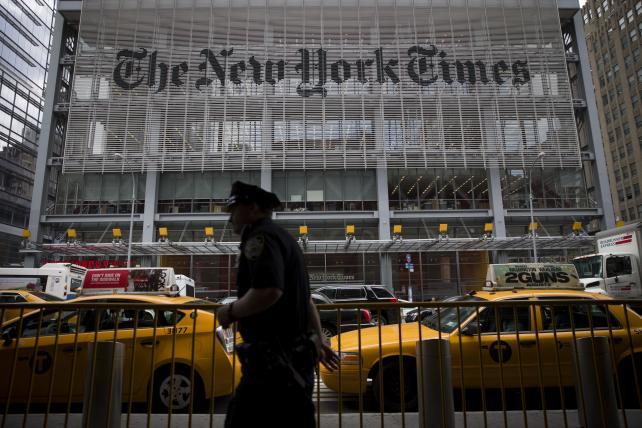 A 5 p.m. deadline bore down on New York Times employees considering whether to accept buyout packages, a bid for the newspaper publisher to trim costs.

The company has said there will be forced cuts if 100 jobs can't be eliminated through voluntary buyouts.

Like many newspapers, the Times is trying transform itself into a digital newsroom as more readers get their news from the internet and as print circulation and advertising decline. The publisher said in a regulatory filing in October that the staff cuts "are necessary to control our costs and to allow us to continue to invest in the digital future of The New York Times."

"They're raising prices to offset the decline in advertising, but that can only go so far," said Ed Atorino, a New York-based analyst at Benchmark Co. The amount of staff leaving may be a "surprisingly big number," he said.

Times media columnist David Carr wrote in his Monday column that he works closely with "a few longtime employees who are considering the buyouts."

"The deadline for putting up their hand is Monday, and it seems clear that we will be losing people with many decades of professional experience, journalists with deep sources and remarkable levels of productivity," he wrote.

"The Times will always be bigger than any one individual and will no doubt find people inside and outside the building who will do their own version of amazing things, but it's still scary to think about making our way without some of the people who plan to leave," he added. "We need to adapt quickly to new protocols, but we can't lose the core, the journalism that makes The Times The Times."

A representative for the Times Co. didn't immediately return a request for comment.