New York Times Tones Down Labeling on Its Sponsored Posts

The New York Times has shrunk the labels that distinguish articles bought by advertisers from articles generated in its newsroom and made the language in the labels less explicit.

The Times became only the latest online publisher to begin selling so-called native ads when it introduced its Paid Posts in January, adopting a tactic meant to draw readers to ads by making them more or less resemble the surrounding editorial content. A bit of reader confusion over what's an ad is inherent.

But the Times has repeatedly stressed the importance of clearly labeling its native ads as paid promotions. And when its Paid Posts first appeared, the labels were arguably the most stringent in all of publishing. A Paid Post from Dell, for instance, is surrounded on all sides by a thick blue border that includes a label at the top saying, "Paid For And Posted By Dell." Just underneath that message, the Dell logo appeared in a darker blue bar running the width of the post. The Dell logo appeared again nearby, next to the author's name.

Several marketers have bristled at all the labeling, suggesting it turned away readers before they had a chance to judge the content based on its quality.

But recent Paid Posts from Chevron and Netflix have replaced the blue moat that enclosed Dell's native ad with a slimmer blue line running only along the top. "Paid For And Posted By" has been trimmed to to "Paid Post," and in slightly smaller type. The company logos, also slightly smaller, appear in a white bar that's not as tall as Dell's dark blue bar.

And because Chevron and Netflix didn't write their Paid Posts, their logos don't appear by the author's name. Instead "T Brand Studio," the unit within the Times that produces content on behalf of advertisers, appears off to the left.

Here is one of the first Paid Posts to appear on the Times' site in January: 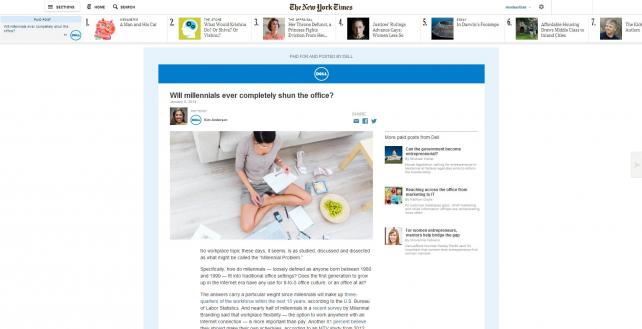 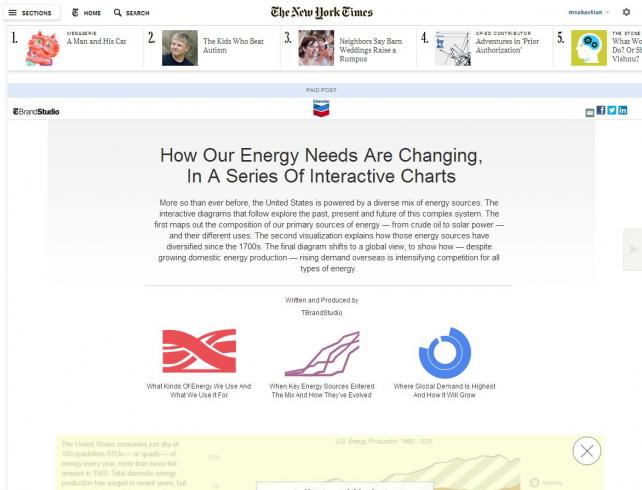 When asked about the change, a Times spokeswoman said the design has evolved over time and pointed out that the "Paid Post" label stays visible even as readers scroll down, unlike the Dell execution's "Paid For And Posted By" language.

It now "includes a consistent header that remains regardless of where the reader is on the page," the spokeswoman explained in an email. "We also removed the blue borders for a cleaner look and changed the header to just say 'Paid Post.' We reference the brand beneath the header and feature the T Brand Studio logo if our team creates the content. This distinguishes content that is marketer-driven from content that is driven by the studio."

Another iteration of Paid Posts on the Times continues to use the language "Paid For And Posted By," though the font is smaller than in the Dell ad. The "Paid For" label persists even as readers scroll down, but there's no company logo next to the author's name. Here's an example from watchmaker Vacheron Constantin: 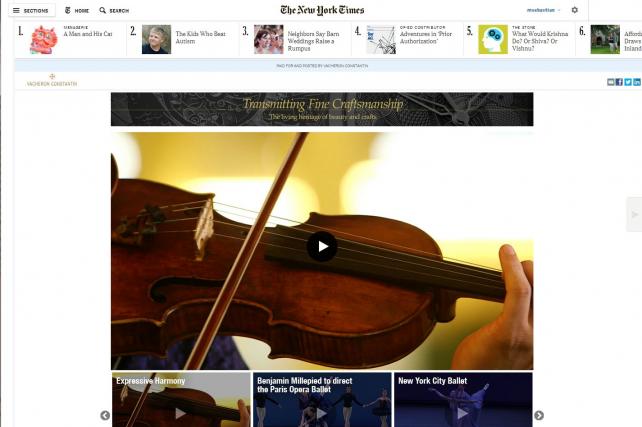 Paid Posts are an increasingly important business strategy for the Times Co. During the second quarter, native advertising helped goose the company's digital-ad revenue, which climbed 3.4% compared with the previous year. But it wasn't enough to hold up sagging print sales, as overall ad revenue declined 4.1% from April through June.

Similar scenarios are playing out around the publishing industry. Print ad sales are in long-term decline, and the display ad business is suffering pressures like automated auctions that drive down prices. Native ads, which can command higher rates than standard ads, are considered a bulwark against this onslaught.

BuzzFeed, which draws all of its advertising revenue from sponsored content, recast the labels on its native ads in June. It replaced phrases such as "presented by" with "promoted by" and "brand publisher." The site also dropped the yellow shading that was wrapped around advertising content on its site. Now only the "promoted by" label is yellow.

Among consumers, at least, the tolerance for native ads might be on the decline. A recent study from the Interactive Advertising Bureau and research firm Edelman Berland, for instance, found that a mere 38% of consumers believe sponsored content adds value to a site that covers general news, entertainment or business. Just 17% of respondents to the study said that sponsored content adds value to news sites, with 48% saying it adds value to business sites and 44% saying the same about entertainment sites.

A study from Contently, a company that pairs brands with writers who can produce native ads, said that two-thirds of readers surveyed felt deceived after learning an article or video was sponsored by a brand. More than half of readers don't trust sponsored content, the study added.

And this week, comedian John Oliver dedicated 11 minutes of his HBO talk show "Last Week Tonight" to skewering native advertising. He even called out the Times advertising executive who has championed Paid Posts, Meredith Kopit Levien, as well as Time Inc. CEO Joe Ripp, who has reassigned editors to report to business-side colleagues, and Jonah Peretti, founder-CEO of BuzzFeed.

It seems unlikely, however, that marketers' appetite for sponsored content will be curbed any time soon. An eMarketer forecast said marketers will spend $2.29 billion this year on sponsored content, including native ads. That's a 20.5% increase over 2013. By 2017, it's expected to hit $3.2 billion.

Publishers, media buyers and marketers all agree -- publicly, at least -- that native ads should be labeled as advertising. But the precise language and style of those labels is up for debate. The Interactive Advertising Bureau, which develops standards around digital advertising, opts for common-sense advice in its Native Advertising Playbook and does not provide specifics.

"Regardless of context, a reasonable consumer should be able to distinguish between what is paid advertising vs. what is publisher editorial content," the Native Advertising Playbook says.

The most common label is something akin to "sponsored content," which The Atlantic has adopted, or "sponsor generated content," which The Wall Street Journal deploys. Several fashion and beauty sites use more ambiguous language. For instance, "Cosmopolitan + American Eagle Outfitters" appears near the top of a denim slideshow on Cosmopolitan.com. That pairing of magazine title and retailer is the only indication that the post is, in fact, an American Eagle promotion.

Marketers for the most part prefer an understated description. "Some form of labeling is necessary to make sure no one feels deceived, but beyond that I don't think they need to have blinking lights," said Scott Donaton, chief content officer at UM.

"In general, if a client is going to create content, they don't want the thing dressed up in way that pushes audiences away from it," he added.

The topic of sponsored-content labeling caught the attention of the Federal Trade Commission, which held a workshop last December called "Blurred Lines: Advertising or Content." It delved into whether advertisers and publishers are doing enough to prevent consumers from mistaking native ads from content.

"Every time we go into a new space there is the issue of how do you regulate it and how do you create standardized formats," said Brent Poer, president at digital agency LiquidThread, a Publicis-owned agency that focuses on branded entertainment and content marketing.

"It's an evolving space," he added. "You have to make sure that the visual statement is out there, but you don't want it to be something that's completely off from what the site it lives on looks like."