YouTube's Mota Goes Mainstream in 'Dancing,' but Will Her Audience Follow? 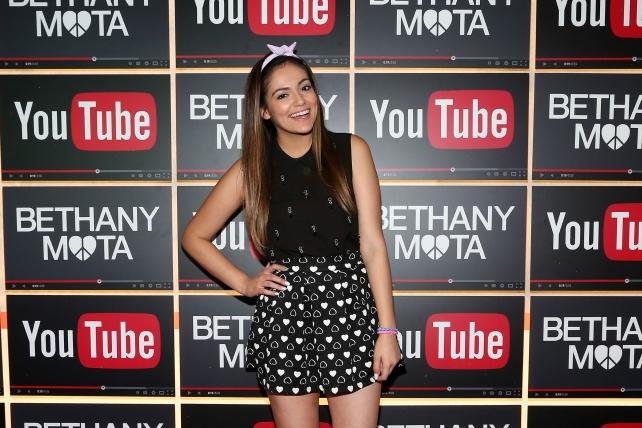 When the producers of ABC's "Dancing With the Stars" searched for celebrities to appear in the show's 19th season, they ended up somewhere they'd never been before: YouTube.

Eager to inject new energy into a hit series that's been on since 2005, they recruited Bethany Mota, an 18-year-old fashion icon whose YouTube channel boasts more than 7 million subscribers. Ms. Mota, who teaches fans how to decorate their rooms, style their hair or pick the right accessory, is the first star from Google's video site to be cast on the show.

"With every day that passes YouTube stars go more and more into the mainstream," said Rob Wade, executive producer of the ABC dance series that returned for a new season last night. "Whereas a couple of years ago you might say you're going into a niche market, there's no way you can say that anymore."

Mota gives Walt Disney Co.'s ABC a tool to attract the younger viewers advertisers want. She may also point the way for traditional media companies that are struggling to grab consumers who don't watch TV. A&E Networks' FYI channel is airing a cable version of "EpicMealTime," a YouTube show about supersized food creations, while the E! cable outlet is shooting a pilot with Grace Helbig, a pop culture-savvy video blogger.

Mr. Wade and his fellow producers are betting Ms. Mota generates a surplus of attention, citing past performers such as TV personality Kate Gosselin and Apple co-founder Steve Wozniak. Ms. Mota posted about the show's premiere several times before it aired, giving the phone number fans could call to vote and retweeting remarks from fans who expressed excitement.

Social media
"Reading all of your #TEAMMOTOUGH tweets and smiling sooooo big," Ms. Mota wrote today to her 1.96 million Twitter Inc. followers. "Thanks to everyone for being so supportive," she posted after her performance.

"Dancing With the Stars" led the night in total viewers and in younger adults, according to a statement today from the network. The two-hour show drew an audience of 13.5 million, according to preliminary Nielsen data.

Ms. Mota's core fan base is young, engaged and active on social media -- a contrast with "Dancing With the Stars" and most network TV, where the average viewer is over 50. Those same attributes were a major selling point for Ms. Helbig, who had a devoted following among E! employees before she taped a pilot.

"Part of our mission is to think about what new voices we want to champion, someone who is a great new face and voice and comes with a following," said Jeff Olde, head of programming for E!, owned by Comcast Corp.'s NBC Universal. "You need look no further than the demographic outside my office door. She speaks to this generation in social media."

Fred Figglehorn
Reza Izad, CEO of Collective Digital Studio, an online video producer, has pushed many of his biggest stars to try TV, starting with Lucas Cruikshank. Known to his fans as Fred Figglehorn, Mr. Cruikshank made the jump with "Fred: The Movie," a 2010 Nickelodeon picture based on his popular character. It spawned two sequels and a series.

"We're going to see increased demand for these types of creators going into a variety of networks," Mr. Izad said. "They can deliver audiences."

Whether YouTube stars can marshal those fans to watch broadcast TV remains to be seen. "Dancing With the Stars" attracted a nightly audience of 15.5 million viewers in its previous season and was the fourth most-watched show on broadcast TV, according to Nielsen. It ranked 33rd with the younger 18-to-49-year-old audiences that marketers target.

"You can't stick a YouTuber on a TV show and have it succeed," said Stephanie Horbaczewski, CEO of StyleHaul, a fashion-oriented network of internet channels. "It's not an automatic win."

The show may still benefit. Ms. Horbaczewski booked five of her network's creators on an episode of Lifetime's "Project Runway" and chatter on social-media networks quadrupled.