The victor of the chicken sandwich wars—featured in a December 2019 case study—continues to reap accolades
READ THIS NEXT
Why so many marketers are 'leaning in' to Twitch
Credit: Popeyes Louisiana Kitchen 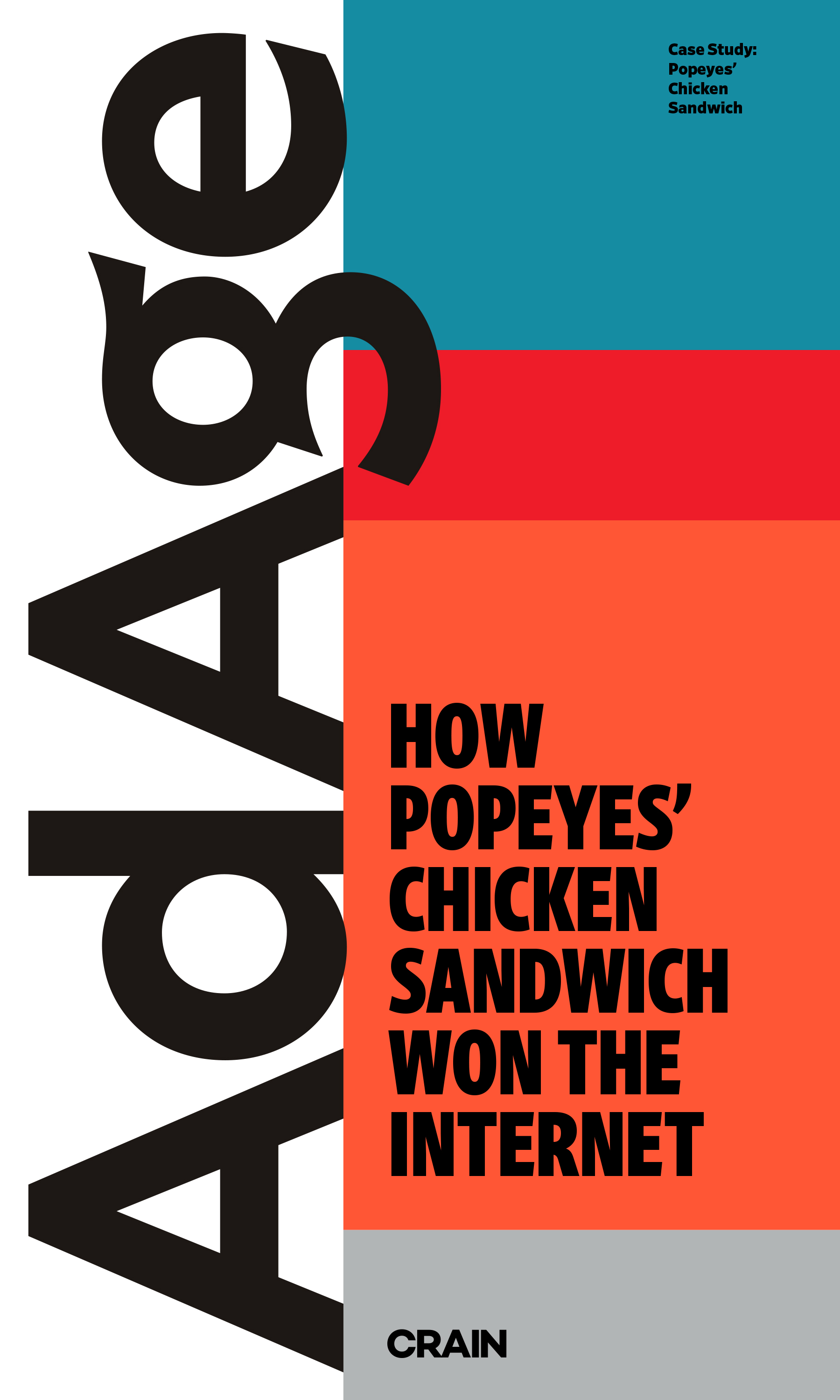 Back in December, contributing writer Michael Applebaum reported on the Popeyes chicken sandwich phenomenon for a Studio 30 case study. Six months later, it seems almost quaint looking back at the social media battles that gave the Louisiana-based restaurant chain a leg up in the Great Chicken Sandwich Wars last summer—not to mention the very long lines and unforeseen demand IRL that resulted in Popeyes selling out of the main ingredient for the sandwich for months.

But in addition to emerging victorious in the marketing battle, Popeyes has now won three Creativity Awards, as Ad Age announced this past Monday: two for Launch of the Year for GUT Miami's play on #Popeyesgate and for GSD&M's two-word tweet ("y'all good?") that set the internet on fire—which also won the Tiny but Mighty award in the Work category.

On June 3, Popeyes joined a growing chorus of brands supporting the Black Lives Matter movement, after Fernando Machado, global chief marketing officer of corporate parent Restaurant Brands International, which also owns Burger King and Tim Hortons, tweeted "Dear creative community, please do not send me another idea for a stunt to show that we support the African American community. Instead, hire more African Americans for the agency. Or help us evolve the diversity agenda here in my company (cause we need it). Actions, not ads."

We are nothing without Black lives. ⁰⁰There's no room for injustice. We commit to strengthening every facet of our culture and policies to foster an environment where equality for Black people is a priority. We'll use our platform to support this movement. #BlackLivesMatter

On the same day, the restaurant's Chicken Sandwich War rival Chick-fil-A released a statement of empathy and solidarity with its African-American colleagues and the BIPOC community at large—while stopping short of declaring "Black Lives Matter." CEO Dan T. Cathy (who had joined the Atlanta Committee for Progress along with other business leaders including the heads of Coca-Cola and Delta Air Lines, pledging to work “on concrete actions and solutions to move toward a more inclusive just society”) wrote on his LinkedIn page:

"I recognize that someone like me cannot fully appreciate and understand the gross injustices that are all around us. I also recognize that talking about the systemic inequality, bias, and injustices in our country will draw criticism. But neither of these reasons makes it ok for me to remain silent about the issues that now so publicly confront our nation. The killings of George Floyd, Ahmaud Arbery and many others is horrifying and merits our outrage. We should also address the disparate impact of COVID-19 on black and brown communities, as well as the disparity in educational opportunities and access to opportunity.... Let’s be moved to action. Let’s join together to build a world that reflects God’s love for all of us."

For years, the Georgia-based chain has been accused of anti-LGBTQ+ bias due to its charitable foundation's donations to religious-oriented organizations that are outspoken in their rejection of homosexuality. Last November, Chick-fil-A announced that it would stop giving to the Fellowship of Christian Athletes and The Salvation Army. Founded by Cathy's father, Truett Cathy, in 1946, Chick-fil-A has been very open about incorporating conservative Christian beliefs into the company's business culture. So it was not surprising that Dan Cathy would agree to take part in a roundtable discussion on race at an Atlanta megachurch on June 14 with the pastor, Louie Giglio, and hip-hop artist Lecrae, among others.

In a gesture of humility and Christian charity, Cathy shined Lecrae's sneakers, but Giglio received almost instant criticism when he commented, “We understand the curse that was slavery—white people do—and we say that was bad, but we miss the blessing of slavery ... that it actually built up the framework for the world that white people live in,” according to WSB-TV in Atlanta. He further inflamed the situation when he suggested that it would improve uncomfortable conversations about race if people replaced the term "white privilege" with "white blessing."

After the controversial remarks were made public, Giglio apologized publicly. Neither Cathy nor Chick-fil-A has commented as of yet. Update 1:11PM EDT: A spokesman for Chick-fil-A tells Ad Age "we do not have anything to add to this story beyond" Cathy's previous statement from June 3. But the spokesman pointed out that Chick-fil-A is continuing to work toward honoring its pledge to create a more just society by committing "$5 million to Black-led non-profits and those serving the Black community in 2020. This giving commitment, which is part of a new ongoing focus for the company’s True Inspiration Awards, quadruples last year’s True Inspiration Award grants."

Why so many marketers are 'leaning in' to Twitch