In the main section of today's print edition of The New York Times, readers will notice a whole lot of nothing on pages 9 and 10. The two virtually blank, back-to-back pages are actually an ad for 20th Century Fox's upcoming film adaptation of Markus Zusak's best-selling novel, "The Book Thief," which opens in New York and L.A. on November 8. At the bottom of the second page appears only a single url that reads wordsarelife.com, which leads to a basic info site for the film. 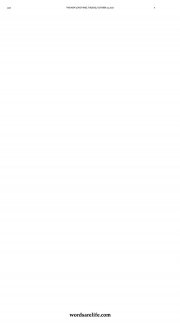 Directed by Brian Percival, the film stars Sophie Nelisse as Liesel Memminger, a young girl living in WWII Germany who finds solace in stealing books and sharing them with others. The point of the ads, says 20th Century Fox Exec VP-Media Julie Rieger, is to recreate the experience of the main character for those who see it.

"In our marketing world today, we have this give, give, give attitude," said Ms. Rieger. "Click here, call this number, get more content. We're sending people all over the place. But with this, we actually wanted to take something away, to make people feel what it would be like to live in a world without words, if only for a moment. That's how our character Liesel exists when we first meet her in the movie."

20th Century Fox is running the ads solely in The New York Times -- a strategic move, according to Ms. Rieger. "You wonder, what would the world be like without words, without The New York Times. It's a very symbiotic relationship. There are only few things so powerful." The cost of a full-page black and white running nationally on a weekday in the paper is $105,840.

Newspaper ads aren't typically a main vehicle for big Hollywood pushes. They usually run right before a film opening or during opening weekend, and are for the most part, sidenotes to larger broadcast and digital initiatives, said Ms. Rieger. But uncharacteristically, the Times ad serves as a key, opening gambit of the company's "Book Thief" marketing campaign. A broadcast spot and digital efforts will follow next week.

"We wanted to do this and let it breathe for a moment," Ms. Rieger said. "There will be no other papers, no big digital companion for now -- we actually resisted doing other things. It took a lot of restraint -- not a word I'm completely familiar with."

Coincidentally, "The Book Thief" campaign bears a striking, but not intentional resemblance to the Times' own editorial piece from earlier this year about the Baseball Hall of Fame and its decision to induct no players in 2013. Ms. Rieger said that she wasn't aware of the story before Fox created its campaign.