A Disappointing Holiday Season for Retailers

Amazon's Christmas Was Merry, but Most Others Saw Only Modest Sales Bumps
READ THIS NEXT
Twitter, YouTube step up misinformation crackdown, and TikTok viral paint star has a new job: Wednesday Wake-Up Call
Shoppers poured into Macy's and other retailers the weekend before Christmas, but ShopperTrak said sales for the two prior weeks were down 2.2%.
Credit: AP

YORK, Pa. (AdAge.com) -- It looks as though most U.S. retailers won't be getting the merry green holiday they'd hoped for. 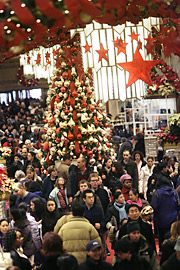 Shoppers poured into Macy's and other retailers the weekend before Christmas, but ShopperTrak said sales for the two prior weeks were down 2.2%.
Credit:
AP
Despite a last-minute sales bump last weekend, the overall holiday retail scene continued its overall plodding underperformance compared to last year, with only a few bright spots. Among them: Amazon's proclaimed best-year ever and overall solid online sales.

Tough two weeks
ShopperTrak estimated the "Super Saturday" weekend from Dec. 21-23 saw an 18.7% surge in sales over the previous year, led by almost $10 billion spent on Saturday alone. However, ShopperTrak said sales for the two weeks leading up to the weekend were down 2.2%.

"As we anticipated, Super Saturday weekend was indeed a significant event for retailers," Bill Martin, co-founder of ShopperTrak, said in a news release. "Retail traffic was slow during the first part of the week, but last-minute shoppers swamped stores on the weekend, allowing retailers to breathe a sigh of relief. ... Based on this performance, it appears our forecast of a 3.6% gain for the holiday shopping season is right in line."

Overall estimates of spending gains for the season had ranged from 3.5% to 4.5%, but the final tally looks like it may be closer to the low end. MasterCard Advisors' SpendingPulse, which reports total U.S. retail sales across all payment forms, estimated a 3.6% increase for the period between Black Friday and Dec. 24. Its report characterized holiday spending for 2007 as surging around Black Friday, lagging midseason, and rallying to the finish.

"Overall, sales came in just above the lower end of the range we were expecting, maintaining the slower, modest growth we've been seeing throughout the year," said Michael McNamara, VP-research and analysis for MasterCard Advisors, said in the spending report. "Anyone who was looking for this holiday season to kick-start a new wave of growth would find these numbers falling short of expectation."

Bad news at Target
Traditional offline retailers have been feeling the pinch. Target Corp. this week warned that its December sales would likely fall below expectations and said its previous estimates of a slight gain may actually be flat or a small loss.

And even the uptick in online sales -- a solid mid-20% range of gains -- is still below last year's gains, which were closer to 30%. Tempering the results is the fact that online shopping still accounts for less than 10% of total retail spending.

"Retailers' cross-channel cohesion ... the 'buy online, pick up in-store' options and the ability to check inventory online were factors, but some of the biggest gainers are ones that operate online only," said Sucharita Mulpuru, principal analyst at Forrester Research. She mentioned Amazon and Buy.com as likely success stories this season. They succeeded with attention to detail and customer service, she said, with everything from offering the ability to pay with alternate methods and including customer reviews to positive checkout experiences and minimal clicks for customers.

Amazon indeed declared on Wednesday that 2007 was its "strongest ever" in 13 holiday seasons, reporting it sold 5.4 million items between Nov. 15 and Christmas. Other Amazon holiday-sales achievements this year included: sales of Nintendo Wii video-game consoles at 17 per second when in stock; enough GPS units sold to create a trail from New York to Philadelphia; and enough Hannah Montana wigs sold to outfit the entire audience at her Dec. 20th concert in Providence, R.I.

Still time left
Of course, retailers could draw more sales this week before the month officially draws to a close. The National Retail Federation characterized the season so far as "modest" gains, but cautioned that it's not over yet. NRF spokeswoman Kathy Grannis said the week after Christmas can amount to as much as 15% of a retailers' total holiday revenue. The day after Christmas is ranked as the sixth busiest of the year, she said. And there are still gift cards to redeem.

"No one is throwing in the towel just yet because there are still a lot of sales to be made this week," she said, "and not only seasonal, but also in new spring merchandise as well."