Marketers Opened up Their Wallets in 2010 as Recession Woes Faded, but a Tepid Economic Recovery Shows Signs of Stalling. So What to Do?
READ THIS NEXT
Tesla is Interbrand’s fastest-growing brand of 2021

Just what we needed: another financial and automotive bailout.

But this time it was banks and cars bailing out adland. Ad spending for cars and credit cards has come roaring back, helping drive 8.8% growth in 2010 U.S. spending for the 100 Leading National Advertisers -- the highest growth rate since 2004.

Financial advertising surged 29% in 2010, and automotive accelerated 28%, based on Ad Age DataCenter's estimates of U.S. spending for the 12 financial firms and 10 automakers that made the 100 LNA ranking.

To be sure, growth rates look good in part because the comparative year was so bad. Spending in 2009 plunged 10.2% in the sharpest drop since Ad Age began the LNA ranking in 1956.

The recovery story is simple. The recession officially ended in June 2009. Retail-sales growth turned positive in November 2009. Private-sector staffing has risen every month since March 2010. Measured ad spending has had year-over-year gains for five quarters.

Yet it's been a plodding recovery. Gross domestic product is expected to grow a weak 2.6% this year, down from 2010's 2.9%, with a consensus forecast of only 3.0% in 2012. The rate of job growth is falling; the unemployment rate is rising. Housing prices are dropping again. Auto sales remain far below the levels of recent decades.

Marketing budgets could come under pressure if the tepid economic recovery stalls.

But here's the most important takeaway from this report: Last year's spending revival demonstrates that top marketers want to, and will, invest in advertising to drive revenue and build brands.

The LNA ranking is based on estimated total U.S. ad spending, consisting of spending in measured forms of media (as tracked by Kantar) plus unmeasured spending (as estimated by Ad Age ).

Measured spending for the 100 LNA last year increased 6.3%, in line with the 6.5% growth that Kantar reported for overall U.S. measured media.

Unmeasured spending for the 100 LNA rose 12.6%, according to Ad Age estimates. That reflects strong growth in such areas as social media, search marketing, direct mail and promotion. Marketers are putting money into disciplines that directly connect them with targeted consumers.

That adds up to 8.8% growth in total U.S. ad spending for the top 100 advertisers, highest growth rate in six years. 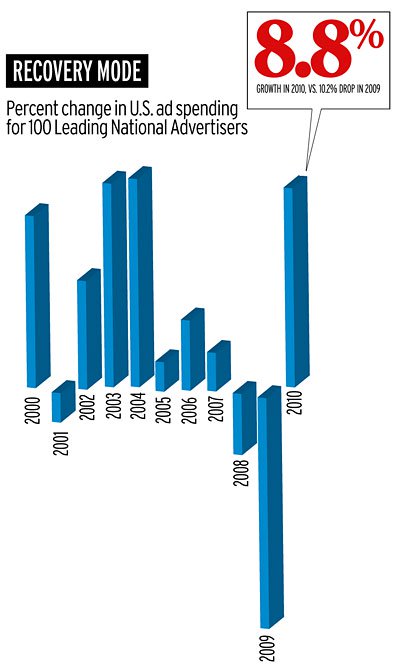 But cuts were the exception last year. Three in four LNA companies increased ad spending in 2010. That's a turnabout from 2009, when just 26 of the top 100 boosted budgets.

Financial services led the charge in 2010. American Express Co. increased its stated worldwide marketing and promotion spending by 59.6% in 2010 as credit markets improved and consumers began spending more freely. The company's global marketing and promotion outlays in 2010 -- $3.1 billion -- far exceeded what the company spent in 2007 ($2.6 billion), before the global financial crisis.

AmEx was not alone. Wells Fargo & Co. spent a record $630 million on advertising and promotion in 2010 as it continued the rebranding of Wachovia, the ailing bank it bought in 2008. That wasn't far below what Wells Fargo and Wachovia spent as separate banks in 2007 ($412 million at Wells Fargo plus $264 million at Wachovia).

JPMorgan Chase & Co. and Capital One Financial Corp. also made big spending increases in 2010 as they ramped up credit-card marketing.

Auto marketers were close behind financial firms in LNA spending growth. Chrysler Group's stated worldwide ad spending rebounded 63.4% from 2009, when the Detroit automaker went through a chapter of bankruptcy.

Fast-rising marketers are pouring money into advertising. U.S. measured spending for Samsung and Kia soared 70.6% and 42.5%, respectively, in 2010, according to Kantar. The two South Korea-based marketers made their LNA debut in this report.

Drugstore rivals Walgreen Co. and CVS Caremark Corp. entered the LNA ranking based in part on spending paid for through cooperative advertising allowances from merchandise vendors.

In a change to LNA methodology, Ad Age DataCenter added a calculation of co-op money to retailers' net -- out of pocket -- ad costs so as to rank retailers based on estimated gross ad costs.

As part of this change, Ad Age excluded co-op ad payments from estimated spending of product marketers, resulting in some 2009 restatements.

Ad Age 's approach is in line with how product marketers account for costs. Packaged-goods marketers generally treat co-op money given to retailers as a reduction in revenue rather than as part of stated ad costs.

Co-op pays a lot of bills. Macy's in 2010 received $345 million in co-op ad allowances from more than 1,000 suppliers. Macy's (LNA No. 19) said in its 10-K: "These allowances represent reimbursements by vendors of costs incurred by the company to promote the vendors' merchandise."

Among that grand group of suppliers was Estee Lauder Cos. (LNA No. 53), which counts Macy's as its largest customer. The cosmetics marketer's 10-K noted: "The company enters into transactions related to advertising, product promotions and demonstrations, some of which involve cooperative relationships with customers."

In retail advertising, it's all about passing the buck -- from supplier to store to newspaper or TV station, all to draw in the consumer, who will pull out the AmEx card and keep this economy in recovery, one day at a time.