Ad Spending Is on the Rise, but Growth Rate May Slow | Ad Age
Skip to main content
Sign In Register

Ad Spending Is on the Rise, but Growth Rate May Slow

What's the Deal? Marketers Are Going Private and Public, Buying and Selling, Focusing on Core Brands
READ THIS NEXT
Sephora plans dozens of new U.S. stores in bet on physical retail resurgence
Credit: 1. Print media defined here by Ad Age as newspapers plus magazines. For this chart, Ad Age aggregated MagnaGlobal's media segments as follows: Broadcast is TV plus radio; print is newspapers plus magazines. Magna includes mobile in internet; and cinema in

Worldwide ad spending will grow 5.3% in the new year, below the 5.9% growth seen in 2010, according to the average of three forecasts from Interpublic Group of Cos.' MagnaGlobal, Publicis Groupe's ZenithOptimedia and WPP's Group M.

U.S. ad growth in 2010 turned out better than predicted. A year ago, forecasters figured 2010 U.S. ad spending would be flat or down a bit.

Slow ad growth is a welcome change from the recent past: 2009 U.S. ad spending tumbled 11.9% (average of three media agencies), the biggest drop since the Great Depression.

Marketers had a busy year of going private, going public and deal making: 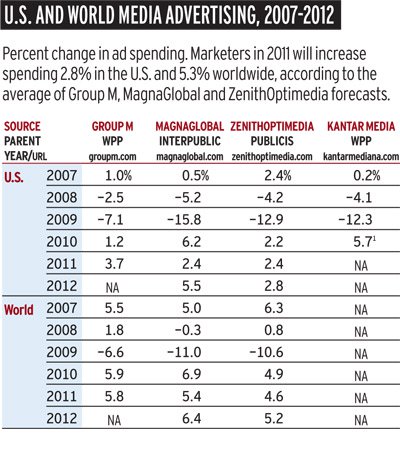