An Adidas campaign on Twitter got hijacked by hate speech
READ THIS NEXT
Jeff Bezos’s wealth soars to $171.6 billion to top pre-divorce record 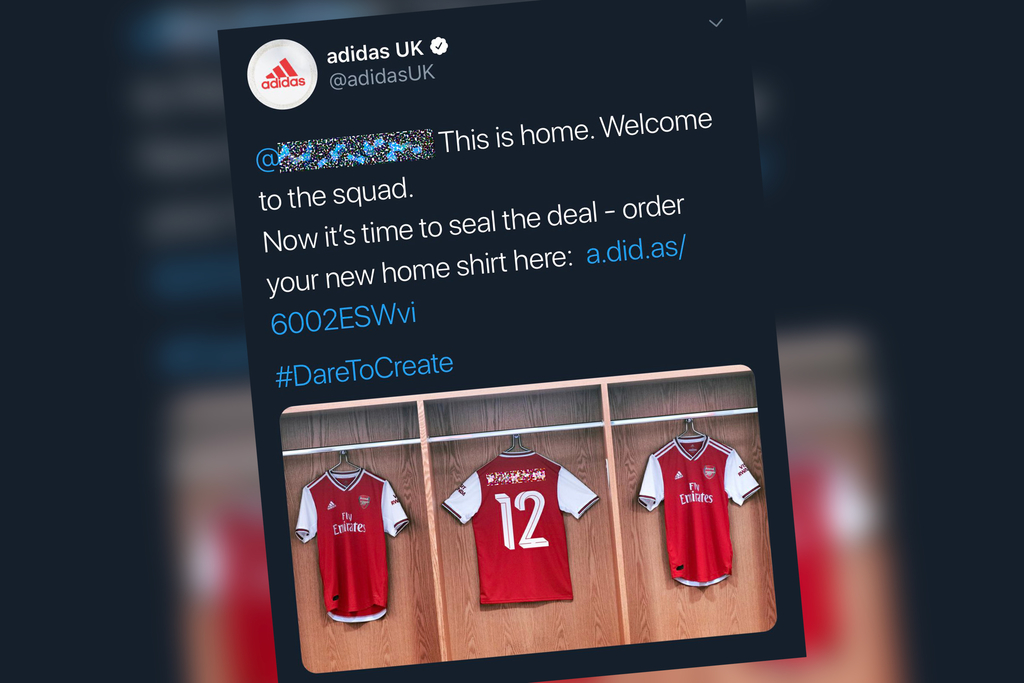 What people are talking about today
An Adidas campaign in the U.K. failed, appallingly, when the brand inadvertently tweeted out photos of soccer jerseys with hate speech and offensive slogans on them.

How did it happen? The campaign allowed people to request an Arsenal jersey with their Twitter handle on it; the users received a photo of what their shirt would look like, with the option to buy one. But as HuffPost UK reports:

The campaign did not appear to filter out offensive words or phrases. Within hours, the brand’s account had sent messages and pictures of shirts containing racist and anti-Semitic language.

One jersey read “InnocentHitler,” according to screenshots taken by Twitter users, while others used hate speech against Jews and blacks. The brand later erased the tweets. Adidas told the HuffPost that users had abused a Twitter personalization mechanic. “Due to a small minority creating offensive versions of this we have immediately turned off the functionality and the Twitter team will be investigating,” Adidas said.

Whatever the investigation finds, this campaign seems likely to become a case study in what not to do in social media marketing.

In other brand controversies
In case you're confused by how Nike managed to upset both Colin Kaepernick and conservative politicians in the same week, here's a brief explainer:

The brand made Fourth of July sneakers that were decorated with a 13-star flag from the Revolutionary War era. But the historic flag proved controversial, as Bloomberg News reports, because “far-right groups have claimed it as a symbol of their cause. It has also been criticized as evocative of an era when slavery was still predominant in the U.S.” Nike endorser and social-justice activist Kaepernick had reportedly asked the company to withdraw the product, and Nike canceled it.

Nike’s decision was quickly attacked by figures on the right as unpatriotic. Sen. Ted Cruz of Texas shared a boycott call: “I love America. I stand for the anthem, respect the flag & honor the men & women who fought to defend our Nation.”

Fox News commentator Laura Ingraham tweeted, “No more @nike sneakers for our family.” And Arizona Gov. Doug Ducey tweeted that he was rescinding financial incentives for Nike to open a plant there.

But: Some of the canceled sneakers apparently leaked into the market; as Bloomberg notes, now they're collector's items, selling online for $2,500.

Goodbye
Lee Iacocca, the high-profile auto executive who helped create the Ford Mustang, rescued Chrysler in the 1980s and became an omnipresent car pitchman on TV, has died at age 94, news reports say. The Washington Post notes that the former Chrysler CEO was famous for TV commercials in which he told viewers, “If you can find a better car, buy it.” Younger readers may remember Iacocca's more recent Chrysler ads with Snoop Dogg, who gave his own take on Iacocca's catchphrase: "If the ride is more fly, then you must buy.

Just briefly:
Breaking: The Trump administration won’t include a question about citizenship on its 2020 Census after all, The New York TImes reports. Marketers had worried that asking people about their citizenship status would lead to inaccurate data about the makeup of the U.S. population.

The backstory: There’s a surprising backstory on Procter & Gamble’s much-discussed new spot, “The Look,” about the black male experience. As Ad Age’s Ann-Christine Diaz reports, the ad stemmed from a tense conversation between a Procter & Gamble exec and a black creative, Geoff Edwards, at an awards show. Read Diaz’s full story here.

‘Panicky reptiles’: According to the latest numbers from Nielsen, in the first quarter of 2019, millennials’ linear TV usage dropped 17 percent to one hour and 55 minutes a day, down from two hours and 17 minutes a year earlier. In other words, “younger viewers are fleeing TV like panicky reptiles scooting away from a burning herpetarium,” writes Ad Age’s Anthony Crupi (and yes, he has a way with similes.)

Podcast of the day: Edelman, the world’s biggest PR company, is family owned. “The advantage of being independent is, you can make these big transitions and not have to worry about immediate acceptance of the idea,” Richard Edelman, president and CEO, tells Ad Age Editor Brian Braiker in the latest edition of the Ad Lib podcast. Listen to their conversation here.

Ad of the day: Ikea created its own font, and the letters are in the shape of Ikea couches, of course. Proximity London worked on the font, which is called Soffa Sans. “According to Ikea, Soffa Sans uses 1,434 products,” Ad Age’s Ann-Christine Diaz writes. And if you were to re-create the font at home, all those couches make for a hefty pricetag: $133,878. Check it out here.