Ads to Be Printed on Grocery Store Conveyor Belts

COLUMBUS, Ohio (AdAge.com) -- That plain-black conveyor belt at the grocery checkout line is the next stop for ad creep. 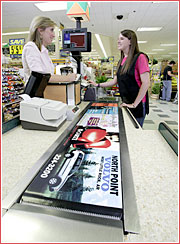 "Conveyor belts have never been on anybody's radar screen for marketing," said Frank Cox, president-CEO of EnVision Marketing Group, a Little Rock, Ark., firm with a patented system to print digital, photo-quality ads directly on conveyor belts. "But a store with eight to 10 checkout lanes, well, you're talking about 100 square feet of wasted ad real estate."

Cincinnati-based Kroger Stores is the first national retailer to open checkout lines to the ads in a test in a few dozen of its stores, mainly in northwest Arkansas; Jackson, Miss.; and Memphis, Tenn. Harps Food Stores, a 52-store grocery chain based in Springdale, Ark., is also testing the system in 13 stores.

The first marketers to sign on aren't national brands, though, and for now shoppers see hometown ads with photos of local real-estate agents and insurance brokers, not the logos of Coca-Cola and Hershey.

Mr. Cox, formerly president of CJRW, an independent ad agency based in Little Rock, said he waited to knock on corporate America's door until the system, dubbed Ads-n-Motion, had the kinks worked out. Additionally, the capital investment is high. Printers capable of printing on conveyor belts cost upward of $400,000.

Mr. Cox bought the patent for the conveyor belt ads from the inventor, Joe Molinaro, and launched EnVision in May 2005. With a sales staff of five, Mr. Cox said he's aiming first for brands in the checkout aisle, such as candy makers Nestle, Hershey, and Mars; film makers like Kodak and Fuji; and, of course, soft-drink brands Coca-Cola and Pepsi.

Exclusivity
As part of the sales pitch, Mr. Cox said he's offering national advertisers the chance to shut out competitors at the cost of $182,800 a year for the entire 55-store footprint, which Mr. Cox claims can deliver 3.3 million impressions a month.

"If a national advertiser joins us, they get to own the region and as we grow, they get the first right of refusal," Mr. Cox said. "That's just about $15,000 a month to shut your competitors out. So if Duracell buys in, Energizer can't."

Kroger has made its own exclusivity requirements, too, especially in the early stages of the test when local ads dominated. No ads in its stores can be in categories competitive with Kroger's own products, including bakeries, florists, butchers and pharmacies.

Waiting to ask Wal-Mart
Mr. Cox said he's waited to ask for space in Wal-Mart stores until ads were mostly national brands. "We just figured they wouldn't want us selling mom-and-pop businesses ads inside their stores," he said.

Alltel, the nation's fifth-largest wireless company, based in Little Rock, is the first major advertiser to buy conveyor ads, though the company said it's limited in how it can use the medium. "It really only works to raise brand awareness," said Andrew Moreau, VP-corporate communications. "You can't promote on it and can only change the message every two weeks. In our business, it's hypercompetitive in pricing but it's too difficult to get a pricing message on something like this. It's much easier to change a newspaper or online ad."

Getting 'checked out'
For Huey Couch, advertising manager at Harps Food Stores, which is testing conveyor ads in 13 stores, the upside is getting a percentage of the gross advertising sales in addition to having its belts paid for and maintained by EnVision.

Mr. Couch said he received a few consumer complaints from one store the first week the ads were installed almost a year ago, but none since. "To the consumer it is probably not this in-your-face-wow kind of thing," Mr. Couch said. "It's kind of more subdued to them. They just want to put their items on the belt and get checked out. If they see it, they may not pay attention, but it's embedded in the mind a little bit."