After Years of Struggle, GM Brand Shows Signs of Big Turnaround
READ THIS NEXT
Google to block political ads after election polls close

A clarification has been made in this story. See below for details. 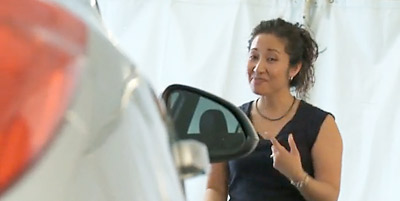 In an effort to reach out to younger audiences Buick launched momentoftruth.com, where potential car buyers can post videos of their thoughts on the 2011 Buick Regal.
NEW YORK (AdAge.com) -- While the focus at General Motors Co. in the last several months has been on the change to VP-Marketing Joel Ewanick, on re-shaping Chevrolet and Cadillac, and on the automaker's impending initial public offering, very quietly the Buick brand has become a driving force for the company.

A new design and a marketing shift to a younger audience have helped U.S. sales of Buick's Enclave, Regal and LaCrosse skyrocket since last year -- and even more so in China, where it is the No. 1 brand.

To steal a line from the classic Oldsmobile campaign, this is not your (grand)father's car any more.

Then again, that campaign didn't increase sales of Oldsmobiles that much, so it remains to be seen if the Buick surge can be sustained. But Mr. Ewanick is confident that the brand is back.

"Buick is just nothing but blue sky," he said. "It's the fastest-growing brand in America, and we're selling LaCrosse as fast as we can get them. It's a great success story."

While any comparisons to such an abysmal 2009 are going to skew positive, it's still better than any other brand in the country. But how did that happen? How has the brand stuck -- fairly or unfairly -- with the tag of being a "senior citizen's car" turned its fortunes around?

"It's a change in design that appeals to younger people," says Charles Krome, writer and analyst for Autotropolis.com. "It's much more up to date and comparable to what's out there on the market. And GM is really making an effort to get past that whole 'grandfatherly' car thing with the marketing to younger customers."

Much was made of GM's decision last year to end its relationship with golfer Tiger Woods (prior to his much-publicized personal problems) and to stop sponsoring the Buick Open. The flailing economy was at fault, and also GM's subsequent need for a $50 billion government bailout, but in some respects it was a calculated move. Golf skews old.

Along with the design, the marketing is part and parcel. GM is positioning Buick as a luxury brand -- often comparing it to Lexus and Acura -- and reaching out to younger buyers while maintaining an Average Joe pricing structure. The average age of a Buick buyer has dropped from 64 to 61 in the past 18 months, according to autoguide.com. That's still high compared to the average mid-50s buyer for Lexus and Acura, but it shows Buick's commitment to marketing to a younger audience. 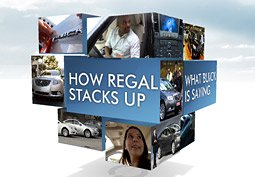 Momentoftruth.com
Including, obviously, social media. GM in June launched a website, momentoftruth.com. Created by digital agency Digitas, it invites comments about the 2011 Buick Regal -- good, bad or indifferent. One woman wrote, "Isn't Buick Regal just a car for Jersey-ites in their 80s?", while another wrote on Buick's Facebook page, "A definate [sic] American eyebrow raiser that says HMMMMM!!! I Love It!!"

The company has also hosted get-together parties in several cities and handed out Flip video cameras for attendees to record their thoughts on the car. The videos are then posted to the site.

"Straightforward advertising is what they had been doing, letting the car be the hero, talking about the features, letting people see the styling," Mr. Ewanick said. "What we need to do in quick order is to start to frame and define what that brand is going to stand for. We're working on that right now."

For traditional advertising, Leo Burnett handles Buick's brands, including the crossover Enclave. According to Cars.com, it was the re-designed, re-badged Enclave that began the Buick's resurgence in 2008. Noting that the automotive press and car junkies are less than enthused by the re-badging process -- which is basically taking one brand's grille and putting it on another model and re-naming the vehicle -- Cars.com said Buick went to great lengths to differ the Enclave from the GMC Acadia and Chevy Traverse, saying "that formula was, and remains, a sales success."

In a comparison between the 2010 Enclave, the 2010 Acura MDX 3.7 liter and the 2010 Lincoln MKT, Cars.com wrote, "The Enclave beats its competitors in many categories -- including some of the most important. It's not the quickest or most nimble, but it's more than competent. The most important features to the crossover buyer are roominess, comfort, efficiency and quality. The Enclave is one of the best models GM makes, and, in this comparison, the editors' choice."

Mr. Ewanick also credited Buick's dealer network for the sales increase, saying, "That dealer network is underestimated; it's one of the best there is. You give them good product, they can sell it. That's what they've been asking for for years. We are going to see design and marketing work together. I don't know why it's never been done like that before."

~ ~ ~
CLARIFICATION: An earlier version of this story did not credit Digitas for the creation of Buick's momentoftruth.com effort.