NEW YORK (AdAge.com) -- For Chipotle, advertising agencies have, for the most part, outlived their usefulness. 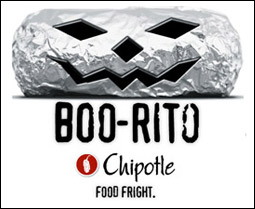 Chipotle will reshape its popular 'Boo-rito' promotion this Halloween, as the chain continues to focus on word-of-mouth marketing.
The burrito chain has churned through four shops in five years, garnering it an unflattering reputation in adland, and even Mark Crumpacker, its chief marketing officer, admitted that Chipotle's a tough client during an Advertising Week event.

Mr. Crumpacker points out that the chain hasn't added a menu item in 17 years and it also does not have a regular cadence of pricing promotions. For those reasons, he said, agencies' experience with other fast food chains is irrelevant.

Last November, Chipotle made the decision to go it alone and bring advertising in-house. After spending at least six months selecting Butler Shine from a group of 27 agencies, Mr. Crumpacker said it didn't make sense to take the time to pick another agency. "By the time we picked one and got them up to speed it would have been a year," he said. "The only reasonable thing to do was to do it ourselves."

But, Mr. Crumpacker is not without a sense of humor about his position as head marketer at a company that puts little value in advertising. "[I told our CEO], if you're not going to let me do advertising, you're kind of making this job pointless," he said.

On a more serious note, he said that his job is to get the word out about Chipotle's commitment to "food with integrity" and that it's not owned by McDonald's, something that still confuses some consumers. Chipotle uses naturally raised meat, supports local family farms and spends more on organic foods as a percentage of sales than its competitors, Mr. Crumpacker said, all facts that many consumers are not aware of.

With that in mind, Mr. Crumpacker is reshaping the popular "Boo-rito" promotion that Chipotle has been running for years. Customers who come to the store dressed up as a burrito -- think college students wrapping themselves in foil -- are rewarded with a free burrito on Halloween. It has been a pricey endeavor, however. Mr. Crumpacker said it cost the chain upward of $3.5 million last year.

"It cost us a fortune. And it wasn't doing a whole heck of a lot for me from a marketing perspective," he said. This Halloween, the Boo-rito promotion will be tweaked to focus on the horrors of processed foods. Customers who dress up as a processed food will be rewarded with a $2 burrito, with revenue going to Jamie Oliver's Food Revolution effort. "I honestly don't know whether it will work or not. ... But this year it delivers something for us; it says something about Chipotle."