Revenue Rising, and a New No. 2 Ad Medium: Internet

CHICAGO (AdAge.com) -- The recession officially ended in June 2009, and the media business began a modest recovery in first-half 2010.

Reported revenue for the nation's top media firms climbed 6.1% in the first six months of 2010, according to Ad Age's analysis. U.S. media employment has added 4,600 jobs since hitting its downturn nadir in May 2010.

What a far cry from 2009, when net U.S. media revenue for the 100 Leading Media Companies fell for the first time since Ad Age began ranking media firms in 1981.

Media 100's decline in 2009 revenue -- 3.8% -- would have been far worse were it not for cable. Video and broadband providers -- cable systems, satellite, telecoms -- managed a 4.3% revenue gain in 2009, reflecting their ability to hike prices and upsell consumers on premium broadband and video services.

Media revenue held up comparatively well during the recession because of the diversity of revenue sources. Subscriptions and fees, for example, fared better than advertising.

The year just ending marked a sea change: The internet (including mobile) passed newspapers in 2010 U.S. ad revenue, making the internet the second-largest ad medium behind TV, according to Interpublic Group of Cos.' MagnaGlobal.

So just how rough was the media recession? Remarkably, 14 members of the Media 100 went through bankruptcy reorganization in 2009 and 2010, with creditors trading debt for equity. 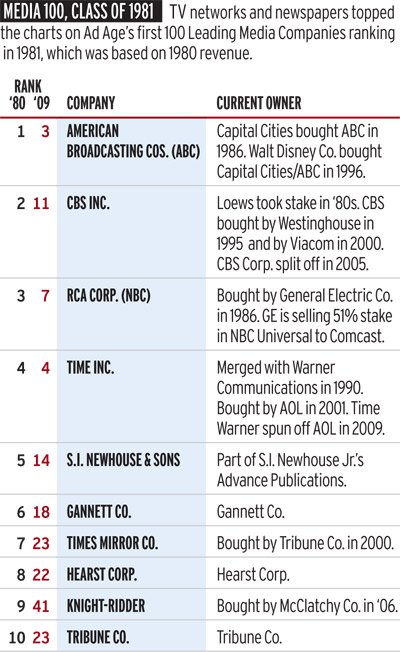