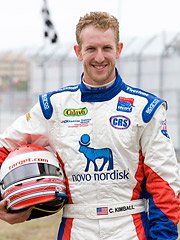 Professional race-car driver and social-media fanatic Charlie Kimball tweets for Novo Nordisk.
Since June 4, Novo Nordisk, the health-care company focused on diabetes care, has supported a branded Twitter page called @racewithinsulin that promotes its prescription insulin drugs Levemir and NovoLog. In yet another twist, Novo Nordisk is not the one Tweeting; rather, it is Charlie Kimball, a 24-year-old professional race-car driver and social-media fanatic who has been using Novo Nordisk insulin since 2007, when he was diagnosed with Type 1 diabetes.

'Natural progression'
Novo Nordisk announced a partnership with Mr. Kimball back in April, when the company became a primary sponsor for Mr. Kimball and his racing team; the company has prominent placement on Mr. Kimball's uniform and race car. At the time, Mr. Kimball was already an active social-media user on his website's blog and personal Twitter and Facebook accounts.

"Twitter was part of a natural progression with a lot of things we were already doing with Charlie," said Ambre Morley, associate director of product communications at Novo Nordisk in the U.S. "He's part of this social-media generation, and as a company we're looking for new and exciting ways to communicate with people."

But venturing into a new-media space with a branded Twitter page -- never mind one where the content is generated by an outside spokesperson -- was unprecedented for a pharmaceutical company and required rigorous consultation and review. To date, some pharmaceutical companies, such as Boehringer Ingelheim and AstraZeneca, have launched corporate Twitter pages, but none have launched branded pages.

"There was no example to follow for how a pharmaceutical company can be successful on Twitter talking about brands," Ms. Morley said. "It took a lot of time with our regulatory and legal team to map out how page would look, what information needed to go on the page, how we could work it out that Charlie could do tweeting, and how we could provide him guidance on how to accurately Tweet."

Clear guidelines
While the FDA does not issue specific guidelines about using social media for DTC, Ms. Morley said she and her team followed the FDA's overarching principles for fair and balanced information -- as well as those guidelines from pharmaceutical and biotechnological membership organization PhRMA. Ms. Morley said Novo Nordisk explained the FDA requirements to Mr. Kimball, and made sure he understood what he could and could not Tweet about.

"It's neat to be a part of [the Twitter page] and be breaking ground," Mr. Kimball said, adding that he hopes his involvement with the company is an inspiration to others who are diagnosed with diabetes. "Diabetes doesn't have to slow you down."

Mr. Kimball had 244 followers at the time this article was written, but does not follow anyone intentionally so that unsolicited responses do not appear on his Twitter page. Among the 53 updates Mr. Kimball has made so far since June, only three have been branded Tweets. But a host of his updates have been related to Novo Nordisk, such as those concerning the Children With Diabetes Friends for Life Conference held last week. Novo Nordisk sponsored Mr. Kimball's attendance to that event.

Mixed response
While Mr. Kimball said that he has received largely positive response to the @racewithinsulin page, not everyone has been so supportive.

Dorothy Wetzel, former VP-consumer marketing at Pfizer who now runs her own health-care ad agency, Extrovertic, had a softer take on the site. "I think it's a great start," she said, pointing out that the pharmaceutical industry is notoriously slow out of the gate, given strict DTC regulations, but that things improve over time.

Ms. Wetzel said pharmaceutical companies can turn to other brands on Twitter to learn valuable ways to use the site. For example, she said Dell has great customer service, Starbucks converses well, and Six Flags has successfully generated buzz with its "funnelcakefriday" hashtag.

Slow first steps
And she is optimistic that in time, pharmaceutical brands will become more adept at providing service, not just a sell, through Twitter. "I think there are additional ways to make it more engaging and more personal.," Ms. Wetzel said. "And I'm excited what the next six months will bring."

"We're putting our feet in the water, and we're stepping in slowly," Ms. Morley said of the overall effort. "We're always looking for ways that we can improve the communication, but we have to make sure that the FDA required language is accurate."

She declined to share financial information about Novo Nordisk's sponsorship with Mr. Kimball, but said that it was not contingent on the number of Tweets he made -- branded or otherwise. Novo Nordisk worked with BioSector2 in designing the Twitter page. Novo Nordisk spent $1.8 million on measured media in 2008 for Levemir and NovoLog, according to TNS Media Intelligence. In the first three months of 2009, it has spent $343,000.