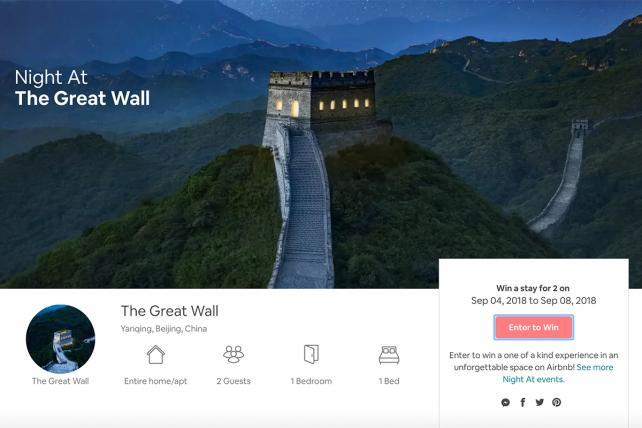 Airbnb had offered a tantalizing contest: the chance to sleep overnight at the Great Wall of China, where a watchtower would be outfitted with cozy furnishings and a four-poster bed. But days after the announcement, it called off the event.

On Chinese social media, some online commenters had expressed concerns about commercializing a historic site, or damaging it. In Airbnb's initial response, it said it had worked with authorities on the project and that protecting the monument was of utmost concern.

But eventually, it called off the event, initially scheduled for next month, altogether. "While there was an agreement in place that was the basis for the announcement of this event, we deeply respect the feedback we have received," the company said in a statement. "We have made the decision to not move forward with this event," and will work instead on other projects.

Separately, a local cultural committee in the district where Airbnb planned the event said on social media that its cultural protection department had not been informed and had not approved of the plans.

There have been other marketing campaigns at the historic monument; in 2015, to promote "Star Wars: The Force Awakens," Disney had an event with 500 Stormtroopers at the Great Wall. And Procter & Gamble's SK-II skincare brand hosted an installation there in 2016, setting up posters of children talking about their dreams.

Airbnb has been making big investments in the China market, though there is competition from similar local players including Tujia. The campaign, from Airbnb and FF Shanghai, tapped into Airbnb's mission of connecting people. "Thousands of years ago, this wall was built as a border," the entry form said. "These days, it brings people from all over the world together."

Airbnb had taken pains to ensure the four winners and their guests would experience Chinese cultural traditions. Guests were to have have dinner there, with each course representing "a different aspect of Chinese culture and the culinary traditions of its people." And there was to be a concert of traditional music too.

To enter to contest, people had to answer an essay question. "Why is it more important now than ever to break down barriers between cultures? How would you want to build new connections?"