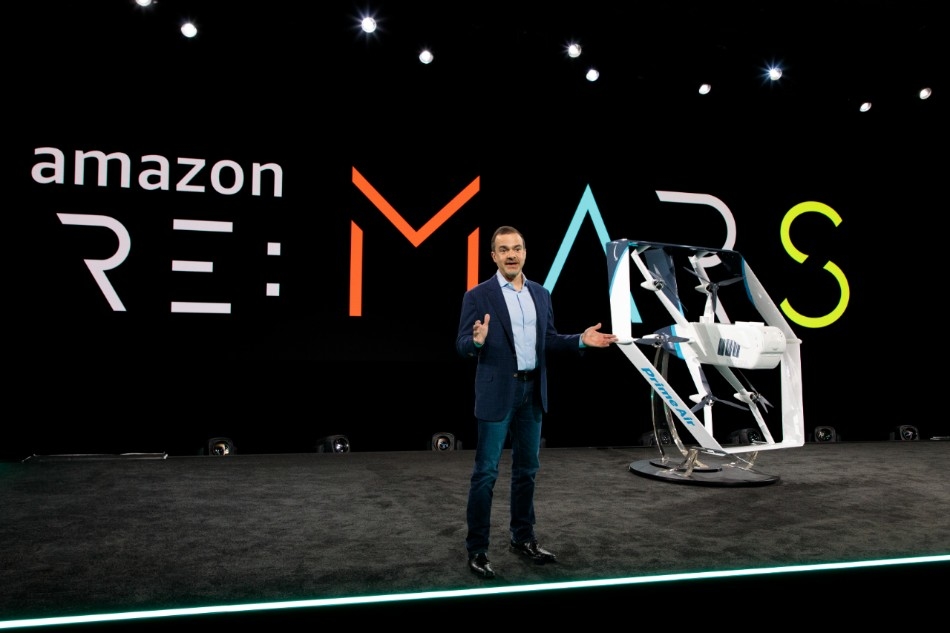 What people are talking about today
Amazon is all excited about delivery drones. Again. At an Amazon conference in Las Vegas, the company unveiled a futuristic-looking new craft that it says will dispatch toothpaste and other household items in tests “starting within months,” as Bloomberg News reports. Amazon isn’t giving many specifics about the tech or the tests, but it has plenty of vague superlatives for its fancy flying object. Here’s an excerpt from Bloomberg’s story:

“We have a design that is amazing,” Gur Kimchi, vice president of Amazon Prime Air, said in an interview in which he declined to say where the device would be tested. “It has performance that we think is just incredible..."

Okaaaay. Bloomberg also says the device was revealed onstage amid “booming music and theatrical smoke.” Which is a reminder: Whether or not this drone turns out to be useful technology, it’s definitely good PR.

Hate
YouTube put an understated headline on a newsworthy company blog post: “Our ongoing work to tackle hate.” The Google-owned video platform, which has been engulfed in near-constant controversy about where it should draw the limits on speech, says it will remove more supremacist and hateful content. That includes videos that glorify Nazi ideology, as well as “content denying that well-documented violent events, like the Holocaust or the shooting at Sandy Hook Elementary, took place.” Which is something many observers have demanded for a long time.

Meanwhile …
another crisis this week showed how YouTube struggles with how to interpret and enforce its own rules. The platform has been attacked for letting right-wing creator Steven Crowder lob insults at Carlos Maza, a journalist from Vox, about his sexuality and ethnicity. In a series of tweets over days, YouTube wavered on how to handle things. The New York Times’ Kevin Roose summed things up on Twitter: “YouTube is now demonetizing Steven Crowder, a day after saying he didn't break any rules. I'm confused!” So is everyone.

Never mind
Fiat Chrysler Automobiles, whose brands include Jeep and Ram, had proposed to merge with Renault, a move that would have created a combined powerhouse bigger than General Motors. Now it has withdrawn the proposal, Bloomberg News reports. The French state, a shareholder in Renault, had reportedly asked for more time and for some concessions, including on safeguarding French jobs.

Bloomberg News reports that Fiat Chrysler said it is still convinced a merger would be transformational. ”However it has become clear that the political conditions in France do not currently exist for such a combination to proceed successfully,” the company says. In other words, Fiat Chrysler says, if things didn’t work out, blame France.

Surprise: Volkswagen’s new U.S. ad tackles its 2015 global diesel emissions scandal head-on. The ad, from agency Johannes Leonardo, takes a calculated risk. Because “by mentioning the scandal now in a new ad, the brand risks reminding buyers about an issue that many probably had forgotten about,” Ad Age’s E.J. Schultz writes.

Quote of the day: “Most people who set out to be the Apple store or Starbucks of cannabis typically end up looking like the McDonald’s of cannabis,” says Sasha Kadey, chief marketing officer at cannabis distributor Greenlane and co-founder of cannabis lifestyle shop Higher Standards. Read more insights from Ad Age’s Inside Pages event on cannabis, compiled by Ilyse Liffreing.

Product of the day: Unilever’s men's brand Lynx "is attempting to capture the scent of a gamer through a partnership with Microsoft Xbox,” according to the Ad Age Marketer’s Brief. So … what does a gamer smell like? Apparently, the scent includes hints of winter lemon, sage and patchouli. Which sounds rather classy (and no, it doesn’t smell like a teenager’s unwashed hoodie, if that’s what you were imagining.) Check it out here.