Commission's Scrutiny of Retailer for Rewarding Posts About Collection Is a Warning to Marketers
READ THIS NEXT
Peloton agrees to a costly recall, and Trump's Facebook account is in limbo: Thursday Wake-Up Call

NEW YORK (AdAge.com) -- The Federal Trade Commission has made public its first investigation into a company's relationship with bloggers, and while the federal agency took no action, the decision provides some insight into how it is viewing marketers' relationships with online communities. 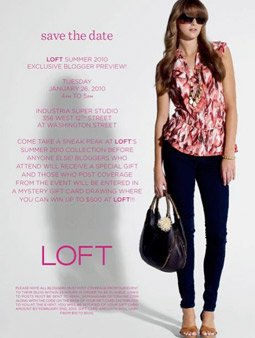 The FTC informed Ann Taylor that, following an investigation, it has decided not to take action against the women's retailer over an event held earlier this year. The retailer had invited bloggers to preview the Loft division's summer 2010 collection, offering a "special gift," and promising that those posting coverage from the event would be entered into a "mystery gift-card drawing," where they could win between $50 and $500.

The invite explained that bloggers must submit posts to the company within 24 hours in order to find out the value of their gift card.

The event and the unusual request for posts to be submitted for a prize received media scrutiny and caught the eye of the FTC. "We were concerned that bloggers who attended a preview on January 26, 2010 failed to disclose that they received gifts for posting blog content about that event," Mary Engle, the FTC's associate director-advertising practices, wrote in a letter dated April 20 to Ann Taylor's legal representation.

Although the agency decided not to take action against Ann Taylor, the case serves to let marketers know that the FTC is keeping a close eye on their interactions with bloggers.

Getting the message out
"This tells me that [the FTC] is looking, and that's important to know," said Douglas Wood, an attorney and head of Reed Smith's Media and Entertainment Industry Group. "They're probably throwing a little fire-starter into it, sending some messages out. The message this time is somewhere between $50 and $500 requires a disclosure."

Last year the agency began cracking down on bloggers, issuing new guidelines requiring bloggers to clearly disclose any "material connection" to an advertiser, including payments for an endorsement or free product.

The FTC said it decided not to take action against Ann Taylor, because, according to the company, the January preview was the first and, to date, only such event. Also, only a small number of bloggers posted content about the preview and several of those disclosed the gifts. A sign posted at the event directed bloggers to disclose the gifts, though the FTC says it's not clear how many bloggers saw the sign. Finally, Ann Taylor's Loft division adopted a written policy regarding its interaction with bloggers in February.

According to a spokeswoman for the FTC, the retailer was cooperative during the process. Ann Taylor declined to comment.

Industry watchers have widely expected the FTC to make an example of a company, in its quest to give the new guidelines teeth. The FTC declined to comment on any additional investigations that may be underway.

"I'm speculating, but what the FTC is doing is not being aggressive intentionally, so they can set up a standard they think is appropriate. Maybe they'll do this a few more times," said Mr. Wood. "It's not an unusual way to begin the educational process. In a way, it's always good to be the first one looked at. The second one might not fare so well."