New Book From Martin Lindstrom Explores How Subconscious Affects Buying Decisions
A major finding in Lindstrom's 'Buyology' is that consumers are driven by not only conscious motivations, but subconscious ones, too.
Credit: 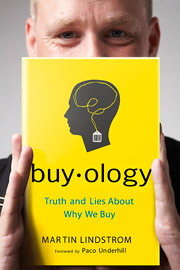 Mr. Lindstrom said he wrote 'Buyology' with hopes that he would start an ethical debate.
"Buyology: Truth and Lies About What We Buy," published by Doubleday, lays out the findings of a three-year, $7 million neuromarketing study by Mr. Lindstrom, who is chairman-CEO of Lindstrom Co. He and a team of researchers in Oxford, England, used the most up-to-date neurotechnologies -- functional magnetic resonance imaging (fMRI) and electroencephalography (EEG) -- on 2,000 people from five countries in an effort to better understand consumer behavior. The goal was to gauge the efficacy of product health warnings, product placement and subliminal messaging, among other things.

Beyond rational choice
A major finding is that consumers are driven by not only conscious motivations, but subconscious ones, too. "The majority of the decisions we make every day are basically taking place in the part of the brain where we're not even aware of it," Mr. Lindstrom said. "I really wanted to find out what makes one brand appeal to us. You really can't ask that question to the conscious mind and depend on a verbal answer."

But you can depend on the brain, he said, maintaining that's why neuromarketing, or the study of how the brain responds to marketing stimuli, is here to stay.

Mr. Lindstrom said one of the most surprising findings of the study involved warning labels placed on cigarette packs. When project researchers asked test subjects if the warning labels worked, most said "yes." These were the subjects' conscious answers. But their subconscious answers told a different story. When researchers repeated the same question and flashed images of the labels while subjects underwent an fMRI, the images activated "craving spots" in the brain, indicating that the warnings made the smokers want to smoke more, not less.

In a different study, researchers found that anti-smoking ads had the same counterintuitive effect.

Counterintuitive claims
"Buyology" also says that a brand's logo is not as important as many have held it to be; that consumers' sense of sound and smell are more powerful than their sense of sight; and that product placement doesn't always work. For example, when Mr. Lindstrom's researchers analyzed product placements in "American Idol," they found that Coca-Cola was far more effective at captivating consumers than Ford Motor Co., even though the corporations similarly paid more than $26 million on their campaigns.

The reason: The Coke label and colors were continually seen while Ford, which sponsored videos on the show, was less visible and less integrated into the action.

Mr. Lindstrom anticipates that his book will be greeted with mixed reviews. He realizes that people are scared about using neuromarketing, but remains convinced that it can be used in an ethical way. "Neuromarketing is like a hammer," he said. "It depends on whose hand you use and how you use it. You can use it to destroy or hang up a beautiful painting on the wall."

The Advertising Research Foundation declined to comment until it had time to review the book.

Marissa Miley
View all articles by this author