'What's Cooking, Uncle Sam?' Depicts How Government's Been Urging Us to Eat This, Not That for Years

Long before First Lady Michelle Obama took aim at obesity, a guy named W.O. Atwater used his post at the federal agriculture department in the 1890s to tell Americans they eat too many sweets. And if you think Nabisco pioneered 100-calorie snack packs, think again. The U.S. government was at it long ago, publishing a poster in the 1930s depicting 100-calorie portions of everything from prunes to bacon.

These are among the dozens of items unearthed by the National Archives that are in an upcoming exhibit called "What's Cooking, Uncle Sam?" which depicts the government's changing role overseeing the marketing and regulating of food. Suffice it to say the rules are a lot tougher than they used to be. It wasn't until 1965, for instance, that the feds required food companies to list ingredients on labels. Care for some copper sulphate or boric acid? Those were some of the preservatives that made their way into foods before the law was enacted.

The Archives gave Ad Age a sneak peek of the exhibit, which runs June 10 to Jan. 3 at the National Archives Building in Washington, D.C. Here are a few things that caught our eye: 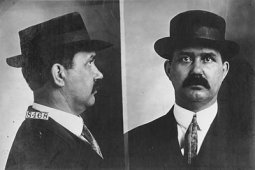 If you think the butter vs. margarine debate is hot now, consider the scene back in the late 1800s, when the butter-making dairy industry fought its new competitor with all its might, even persuading Congress to enact a margarine tax. The tax wasn't repealed until 1950, long after John McMonigle (pictured here) spent nearly a year in prison for violating the Margarine Act. 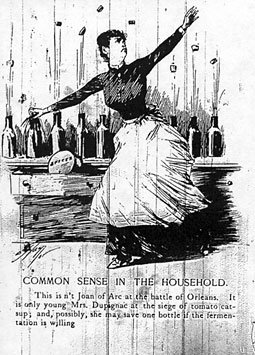 The ketchup market, now dominated by the likes of Heinz and Hunts, was once a crowded battlefield, with more than 100 brands slugging it out in the early 1900s. One problem: bottles tended to explode as a result of the fermenting tomato cores and vinegar added to the product. (This poster, supplied to the exhibit by the FDA, shows a housewife struggling against the explosions.) Although some processors added benzoate to calm the ketchup down, Henry Heinz proved you could make explode-free ketchup by using a clean factory and ripe tomatoes. Imagine that . 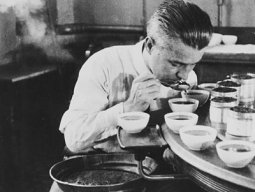 Wonder what the tea party would say about this: The government used to get seriously involved in regulating tea, beginning with a tough law passed in 1882 that set standards aimed at preventing the "importation of adulterated and spurious teas." A later version of the act was not repealed until 1996. 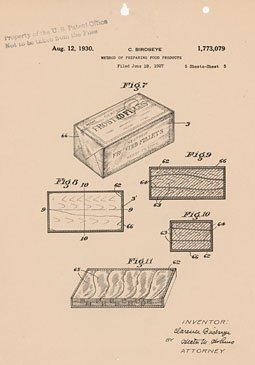 Although Clarence Birdseye gets most of the credit for pioneering frozen foods, the government played a big role. In the post-World War II era, frozen orange-juice concentrate was the top frozen-foods seller, thanks in part to USDA scientists who improved the product. 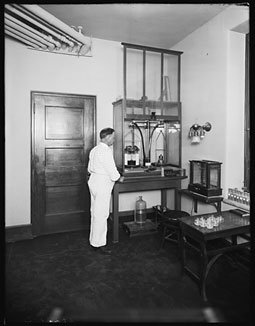 The government has long tried to get Americans to eat healthfully, and W.O. Atwater was among the most aggressive advocates. The USDA food scientist in the 1890s told us to cut the fat and get more exercise. One of his favorite tools was the calorimeter (pictured here), which was considered cutting-edge at the time, costing $10,000 a year to operate. 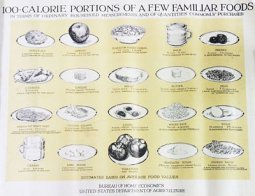 6. Counting calories, way back when

The USDA didn't publish its first food pyramid until 1992, but the feds have been concerned with calories for a while. Consider this 1930s-era poster, published by the USDA's Bureau of Home Economics, which shows 100-calorie portions, including a serving of "medium fat" roast beef. 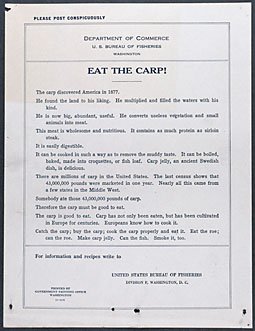 How bout this for a tag line: "Eat the Carp! … It can be cooked in such a way as to remove the muddy taste." This was among the selling points on a World War I-era U.S. Bureau of Fisheries poster in a move to cut down on the growing population of carp, which began to threaten other species. 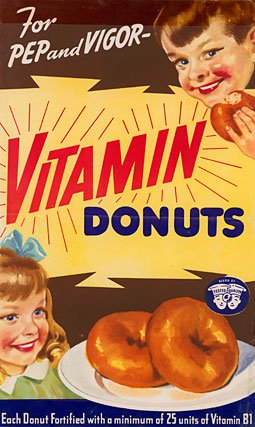 Now here's a lobbying campaign Homer Simpson would've been proud of : A company called the Doughnut Corp. of America in 1942 sought to get its special "vitamized" doughnuts included in a government nutritional campaign. (The move played off reports at the time that a lack of Vitamin B was causing Americans to "lack energy and motivation.") "What part can the donut play in furthering the nutritional campaign which you are projecting?" company representative J.I. Sugerman (yes, his real name) asked in a letter. A federal nutrition official responded that the government did not have an objection to the company using "enriched flour," and promoting it, as it can "give some assurance vitamin value is not lost unduly on the frying." But doughnuts "should not be designated as enriched doughnuts since this term should be applied only to flour and bread."