Australia's high court last week upheld the Plain Packaging Act, making it the first country to ban brand logos on all tobacco packages. That has led some to speculate whether the ruling could set a global marketing precedent for everything from cigarettes to sugary drinks to alcohol.

"It's already happening," said Dan Jaffe, exec VP-government relations for the Association of National Advertisers. "Whether it comes to fruition is the question." 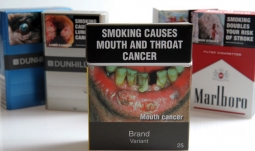 Australia's ruling requires tobacco and cigarettes to be sold in plain green packages that feature nauseatingly graphic pictures of the health effects of smoking. The packages are meant to dissuade consumers, particularly young ones, from even making the purchase.

Several big tobacco manufacturers, including Philip Morris and British American Tobacco, challenged the initial Plain Packaging Act in Australia, arguing that it violates intellectual property rights and devalues their brands and trademarks. But the Act was upheld, which means, come Dec. 1, the familiar red-and-white "roof" branding for Marlboro -- along with the carefully cultivated identities of every other cigarette brand -- will be no more in Australia.

In a statement, Philip Morris said "There is still a long way to go before all the legal questions about plain packaging are fully explored and answered."

Scott McIntyre, spokesman for British American Tobacco, said BAT would comply with the law, but questioned whether it would spawn further problems. "Although it passed the constitutional test , it's still a bad law that will only benefit organized crime groups which sell illegal tobacco on our streets," he said in a statement. "The illegal cigarette black market will grow further when all packs look the same and are easier to copy."

The ruling was hailed by health ambassadors across the world, with World Health Organization Director-General Dr. Margaret Chan noting in a statement that "The lawsuits filed by Big Tobacco look like the death throes of a desperate industry. With so many countries lined up to ride on Australia's coattails, what we hope to see is a domino effect for the good of public health."

It's that domino effect that has marketers and ad agencies in the U.S. and other countries concerned.

"The government has broad authority to do its own type of advertising, with very emotive materials, including anti-tobacco ads," Mr. Jaffe continued. He cited the U.S. government's $54 million ad campaign, unveiled earlier this year, which used real people and graphic examples of those who suffered severe health consequences from smoking. "What we're saying the government can't do and must not be allowed to do is force other people, such as companies, to use their own money to express the government's interest and to promote their marketing."

Mr. Jaffe said he expects that the First Amendment would serve to stonewall further encroachment by the government, although both he and attorney Bill McGrath -- a partner in the Washington D.C. firm Wiley Rein who specializes in this type of litigation -- agree that they expect the Supreme Court to eventually become involved in two particular cases.

The U.S. Court of Appeals for the Second Circuit recently struck down new regulations issued by New York City that required graphic images at stores selling tobacco products. The court held that the regulations were preempted by federal law. This follows a ruling in March by the U.S. District Court for the District of Columbia that prohibited the use of graphic warnings for tobacco products and advertising.

"The biggest signal of what to expect in the future will be these two court cases, especially the case here in Washington," Mr. McGrath said. "The district court basically said the [use of graphic warnings for tobacco products and advertising] violated the First Amendment. The manufacturer does have a right to be able to convey information about their brand, have people distinguish their brands from others, and convey commercial messages that are not false or misleading. That one is going to the Supreme Court, no doubt in my mind."

Mr. McGrath has little doubt who the next government target is after tobacco. "I would say, especially, the manufacturers of junk food," he said. "We all know that A) obesity is a significant health problem and B) it has become a prime government focus. It parallels the government's interest in cigarette smoking. You have already seen individual action taken on the state level."