Fast Feeders Turn to Chefs in Battle for Share

Burger King, Domino's, McDonald's Among Chains Trotting out Experts in Ads to Tout Quality and Freshness
READ THIS NEXT
Dodge pays homage to history with EV logo

Flip on any number of cable channels and chances are you'll see a chef hosting his or her own show. Now you're seeing them more in commercials -- for fast-food companies.

To cater to consumers increasingly interested in higher-quality and fresher food, fast feeders and pizza chains have been using their chefs in various ways to tout their products as such. "Everyone is looking for a way to stand out because it's a battle for share, since the industry isn't growing much," said Bonnie Riggs, restaurant industry analyst at NPD, noting that the battleground is more often becoming about quality and freshness. Enter the chef: "You're going to be seeing quite a lot of [them]," she said. 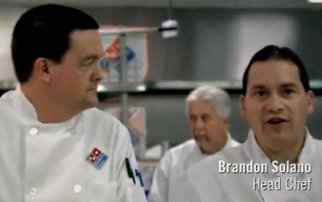 Here's a rundown of some chains that have been featuring culinary experts, and how they're doing it.

Domino's made waves when it launched its massive turnaround campaign in late 2009 and admitted its pizza had been gross. The No. 2 chain in the category began featuring "Top Chef" fan favorite Fabio Viviani, and Brandon Solano, who most recently appeared in the ads for Domino's new Artisan pizza, beginning in late September. Mr. Solano at the time of the ad launch was VP-brand innovation -- a job in which he ran the test kitchen, as well as worked with marketing -- but the "chef" is now out of the kitchen as VP-franchise development, tasked with invigorating growth in the U.S.

One of Burger King's recent ads has been for the Chef's Choice burger. And though John Koch, executive chef and director-product innovation and culinary R&D, isn't featured in the ad, his signature is —and, well, it's the Chef's Choice burger. "There's word association there even if they don't actually have the chef in the ads," said Ms. Riggs. A spokeswoman for the No. 2 burger chain said that while there are no plans to feature Mr. Koch in any ads, "it remains a possibility." He joined Burger King in 2010 and has worked as VP-food service sales at Colorado Premium and led the national chain's account sales team at Cargill Value Added Meats.

While the country's biggest burger chain hasn't featured current chef Dan Coudreaut in its advertising or marketing, he has played a PR role, having been interviewed in multiple publications for product introductions, including fruit and maple oatmeal, smoothies and frappes, Angus third-pounders and snack qraps. His title is executive chef and director of culinary innovation, but a spokeswoman said his innovation team works with various departments including supply chain, operations and marketing. He joined McDonald's in 2004 and studied at the Culinary Institute of America, later working as executive sous chef at Dallas' Café Pacific and chef de cuisine at the Four Seasons.

He may be one of the only people in the country with the title "chief chicken officer." Aaron Person, a 25-year KFC veteran cook, this summer was tasked to act as a spokesman for the rollout of the chain's Cook Certification Program, an initiative that KFC cooks will participate in "as the chain works to ensure each and every restaurant location continues to maintain the quality Colonel Sanders demanded more than 70 years ago." Mr. Person was to star in in-house videos designed to show KFC's cooks how to best prepare the chain's super-secret original fried-chicken recipe, but KFC has said he may appear in coming consumer ads (currently they feature KFC cooks).