Skippy is moving to Minnesota. 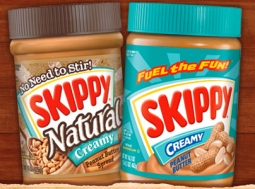 Hormel Foods Corp., which recently finalized its acquisition of the iconic peanut-butter brand from Unilever, is moving the creative account to home-state agency BBDO Proximity, Minneapolis, Ad Age has learned. Skippy was at Barton F. Graf 9000 in New York, which in recent years had amassed other Unilever food brands, including Wish-Bone and Ragu.

But the shop's chances of hanging onto Skippy seemed thin once Hormel scooped it up, considering the Austin, Minn.-based marketer's more than 80-year-old relationship with BBDO Proximity, which works on brands such as Spam and Jennie-O. The Skippy win "builds on a great relationship and it also brings something fresh and new to the relationship," Neil White, president and CEO of Proximity, told Ad Age, confirming the account move.

Barton F. Graf 9000 did not immediately return a call for comment.

Unilever, whose ad budget is dominated by personal-care brands such as Dove and Axe, announced the Skippy sale in early January, saying it wanted to "continue to sharpen our portfolio." The move followed the sale last year of two other food brands, P.F. Chang and Bertolli frozen meals, which ConAgra bought in August for $267 million. The roughly $700 million Skippy transaction closed last week. Hormel views the deal as a way to diversify its food portfolio while growing its global footprint. The marketer projected annual sales of $370 million for Skippy, including $100 million outside the U.S.

Skippy in the 1970s was backed by memorable TV ads featuring Annette Funicello, who told viewers that "It's hard to beat Skippy."

But in recent years, Skippy has been beaten pretty badly by J.M. Smucker Co.'s Jif, which holds a commanding lead in peanut-butter sales. In the U.S., Jif controls 37% of the nut-and-seed-based spread category, while Skippy is a distant second at 16.5%, followed by ConAgra's Peter Pan at 11.7%, according to Euromonitor International. The global gap is narrower, with Jif at 19.2% share and Skippy at 12.3%.

China might offer a big opportunity for Skippy, where it is the top peanut-butter brand, according to Hormel. The marketer also says Skippy is the "leading brand in the faster-growing subcategory of natural peanut butter." There also seems to be some marketing upside: Unilever has barely lent only nominal ad support to Skippy in recent years, spending barely any measured media on the brand in 2011 and 2012, according to Kantar Media.

For the BBDO network, the win follows another pick up at a Midwestern office: Energy BBDO in Chicago secured the Pearl Vision creative account from Arnold Worldwide in January. The Skippy win also represents a comeback of sorts. The agency had the brand from 1989 to 2004.

Skippy, which was first introduced in 1932, was controlled for decades by Bestfoods, which was acquired by Unilever in 2000.