Enhanced-Water Start-up Secures Deals by Giving Players Stakes in Company
READ THIS NEXT
Quibi, one of Hollywood’s biggest flops, will reportedly close

NEW YORK (AdAge.com) -- For start-up brands in the crowded beverage category, endorsements from bold-face names can make all the difference. But how does a brand without a track record land those deals? Increasingly, they're offering up slices of their company.

Will it be a hit? Johan Santana will be one of the drink's endorsers.
SoNu Beverages, a fledgling enhanced-water company, has swapped equity for endorsements from New York Mets Johan Santana and Jose Reyes. Each player's stake amounts to about 1% of the company, though the players' agent, Chris Leible, VP at Peter E. Greenberg & Associates, said that figure isn't wholly representational given the nuanced nature of these types of deals. It's the first time either player has taken equity in a company in exchange for endorsement.

"[Given] the amount of money they're making on the field, a few thousand dollars to take a picture to promote a drink doesn't make a huge difference to them," said Mr. Leible. "Whereas more of a partnership idea, where the payoff in the future could be much greater, [that's interesting]. And they feel like they're part of the brand."

These types of deals have gained steam in the past year, say agents, boosted in part by the multimillion-dollar payouts received by 50 Cent and the Mets' David Wright when Vitaminwater was sold to Coca-Cola in 2007. PureSport, another beverage company, has grabbed headlines for its deals with Michael Phelps and three other swimmers. That group swapped endorsement deals for a reported 5% share in the start-up.

"Vitaminwater was a very visible deal that made a lot of people in the industry look at these deals and say, 'Maybe the upfront money isn't as important. Maybe the [long-term] opportunities are more important,'" said David Weiswasser, president-Platinum Rye Entertainment, a broker of celebrity pacts. "A stake in something can outlast their careers. And they're looking for business opportunities beyond their everyday careers."

Money for brand development
The arrangement also allows SoNu to funnel its cash into media buys and brand development. Kara Schnabel, VP-marketing for SoNu, said the company expects to spend about $1 million on its first major campaign, which will feature Messrs. Santana and Reyes and launch this summer. The company is also working on an equity deal with an Olympic skier.

New York-based Benjamin & Ribaudo, the brand's creative agency, has also received equity in the company as a bonus for good work, Ms. Schnabel said. "It's important to us that we incentivize our partners to help build long-term relationships and loyalty," she added. 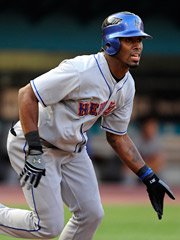 Reyes: The shortstop will appear in a SoNu campaign this summer.
Victor Ribaudo, VP at Benjamin & Ribaudo, said this is the first time the agency has been rewarded with equity in a client. He declined to quantify the agency's stake in SoNu, saying only, "it's a nice little piece." He and his family are also investors in the company. "We, as an advertising agency, of course, give our all to any client we have, but this takes it one step further," Mr. Ribaudo said. "When you're actually part of the company, you have a lot more fun working on it. It's part of who we are now."

SoNu, fruity water boasting a cocktail of vitamins and electrolytes, is seeking to distinguish itself with USDA organic and kosher certifications. Initial sales have been promising, according to executives, with major outlets including Whole Foods, Duane Reade and Shop Rite beginning to stock the brand. Distribution is focused in the Northeast, though the brand is gaining traction in other areas of the country.

The timing could be right for SoNu, given the flavored- and enhanced-water category was a bright spot in beverages last year. Volume increased 8% while the entire beverage category declined 2%, according to Beverage Marketing Corp. Still, according to Mintel, the category saw plenty of entrants in 2008, with 361 launches, up nearly 50% from the year before.

Hence the endorsement. "It legitimizes the brand. And it's helped us to get new accounts too," Ms. Schnabel said. "Johan and Jose are New York heroes. The company is based in New York, and our distribution is concentrated here. They're great role models that we wanted to be attached to."