CHICAGO (AdAge.com) -- It all started with a little fun and games, dumping Facebook friends for a free sandwich. Burger King, through agency Crispin Porter & Bogusky, posted a Facebook application last week that promised users a free Whopper if they eliminated 10 friends. 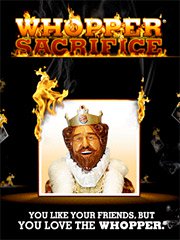 Since then, 234,000 friends have been axed as part of "Whopper Sacrifice," for a total of 23,400 free lunches -- likely to be eaten alone. After all, the application alerted a person's friend network when someone was dumped over one-tenth of a burger. Generally, when a Facebook user cuts a friend, the person isn't notified, nor are any of their friends. But because Burger King was essentially singling out users for ridicule, Facebook had a beef with the application.

"We encourage creativity from developers and companies using Facebook Platform, but we also must ensure that applications meet users' expectations," Facebook spokesman Matt Hicks said in a statement. "After constructive conversations with Burger King and the developer of the application, they have decided to conclude their campaign rather than continue with the restrictions we placed on their application."

In a statement, Burger King spokeswoman Katie Boylan said Facebook had been a "great sport," but that the site had called for changes that would have resulted in an approach to the application counter to what the fast feeder had developed. "Ultimately, based on philosophical differences, we decided to conclude the campaign and chose to 'sacrifice' the application," she said.

Relief for franchisees
Chris Ondrula, chief operating officer of a Chicago-area Burger King franchise, said the end of "Whopper Sacrifice" was a relief. "I thought it was a little bit of a risky maneuver and seemed to be generating sort of a backlash," he said, adding that franchisees were also concerned about being deluged with Whopper coupons.

Many operators, he said, had been caught flat-footed. "Franchisees would like to be kept in the loop when things like that happen," he said. "It puts people behind the register in a difficult position not to know what [customers] are talking about."

Burger King has stepped up its characteristically edgy marketing in recent months. The chain launched "Whopper Virgins" in December, and then a limited-time scented spray for men called "Flame." "Angry Whopper," a spicier take on the old classic, was released last week, just as "Whopper Sacrifice" bowed on Facebook.