Black Friday, Opaque as Ever

CHICAGO (AdAge.com) -- Retail sales will be up 4% this holiday season. Or not.

Though the holiday-shopping season doesn't officially start until the day after Thanksgiving, so-called Black Friday, the annual ritual of predicting holiday-sales growth has been in full swing for a month or longer.

Historically, the forecasts haven't been as far-flung as one might imagine. The National Retail Federation, Deloitte & Touche and TNS Retail Forward have all predicted holiday-sales increases within 2% of the actual number since 2001. But while the numbers are close, the data sets are not.

Each organization designates a different span of time for the "holiday season," and each includes a different array of industries. It all adds up to a lot of finger pointing -- and uncertainty. Marshall Cohen, chief industry analyst with NPD Group, for example, doesn't even bother estimating sales increases.

"You might as well use a crystal ball," he said. Instead, his organization has surveyed consumers during the last 50 years about how much they're going to spend on holiday shopping and whether it's going to be more or less than the previous year.

Mostly typical holiday
Based on his research, Mr. Cohen predicts consumers will start shopping later than ever this year -- and not be heavily affected by economic trends. "Consumers still have the same number of relatives, the same amount of money or lack of money in their wallet, and we still spend more money than we make," he said.

The National Retail Federation is another proponent of consumer research but makes its holiday forecasts based on its chief economist's reading of economic data. The group is predicting a 4% sales increase over last year to $474.5 billion. Since it's the world's largest retail trade organization, however, its annual holiday-sales projections are met with a degree of skepticism. "We have a reputation of being an industry cheerleader, and that's ridiculous," said NRF spokesman Scott Krugman. "How does it benefit the retailers if we create impossible expectations?"

Last year the organization predicted a 5% increase, slightly above the actual 4.6% increase. The NRF predictions apply to November and December and exclude restaurants.

Consumer research also has gotten dicey as people buy more gifts that aren't always counted in holiday-sales data. "The whole gift-card craze has lengthened the time the season's revenue is realized," said Phil Rist, exec VP-strategic initiatives at Ohio-based Big Research, which has a contract with the NRF. "And if the gift card is for a movie theater or a day spa or iTunes, those aren't traditional holiday retailers."

Mr. Krugman said it's important to do economic as well as consumer research -- and keep them separate -- to understand what is really going on. "Some people get too scientific," he said. "You've got to be able to trust consumers to do consumer research."

Correcting statistics
Not everyone feels that way. TNS Retail Forward has based its projections on government data -- and a certain amount of tweaking -- since the early 1970s. Its chief economist, Frank Badillo, said his methods are a blend of "art and science," meaning that sometimes economic data and a statistical model yield results that clearly don't reflect the current mood.

"When you see models that aren't right, you can tweak the model based on what you know about the industry," Mr. Badillo said.

Retail Forward is predicting a 3.3% increase in holiday spending this year. Its estimates are based on the entire fourth quarter.

Deloitte & Touche has used a combination of a consumer survey and economic data to formulate its holiday predictions for 22 years -- and it has had uneven results with its predictions in recent years. This year, Deloitte expects a 4.5% to 5% increase, one of the most bullish estimates. Deloitte's predictions apply to November, December and January in order to account for the month following the holidays, when the majority of gift cards are redeemed.

Carl Steidtmann, chief economist for Deloitte Research, said that while the economy's woes are obvious, income growth is at its highest level since 2003, and last January's sad performance should make the next one look better by comparison.

And it may not really matter what happens on Black Friday. While it's the biggest single day of shopping, accounting for about 15% of holiday purchases, according to BDO Seidman, the week before Christmas is a more important indicator: It accounts for 21.3% of holiday sales.

While retailers prepare for Black Friday and its online equivalent, Cyber Monday (the start of the week after Thanksgiving, when consumers begin Christmas shopping at work) some less-traditional marketers are looking for an extra holiday bounce. 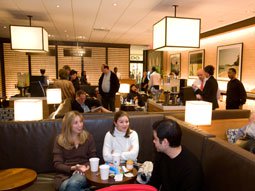 AmEx sets up spots where members can relax at the mall.
American Express is setting up lounges at malls in Boston and New Jersey where card members can relax, enjoy refreshments, meet with shopping specialists and get their gifts wrapped. "The Members Lounge is a way for us to bring the value of American Express card membership to life during the hectic holiday shopping season," said VP Robin Korn.

Kraft Foods is using the morning after Thanksgiving to sample its new Maxwell House coffee blend. Maxwell House, which previously used a blend of Robusta and Arabica beans, has now gone to 100% Arabicas and will be passing out samples at malls in 15 markets.

Xbox, Hilton, Skittles, AT&T, New Line Cinema and Sears are among the marketers working with Reactrix Systems, which uses interactive billboards that allow shoppers to locate its clients' brands quickly in 175 U.S. malls beginning on the day CEO Mike Ribero calls "the Super Bowl of retail."