The i3 EV Described as a 'Mega-City Vehicle'
READ THIS NEXT
What retail marketers are prioritizing for the post-pandemic era
The BMW i3 Electric Vehicle
Credit:

Tesla's in for a shock. BMW will heavily target the urban hipsters and city-dwellers that drive its expensive electric car with its first true electric vehicle: the new i3.

Describing it as a "mega-city vehicle," the luxury car maker simultaneously unveiled the new i3 in Manhattan, London and Beijing on Monday. With a driving range of 80-100 miles, the new compact hits the U.S. market early next year at a price of $42,275.

BMW's the first luxury nameplate to roll out a true electric. The marketing strategy for the funky-looking car is aimed at the kind of upscale, urban consumers who drive a Tesla, the country's best-selling EV. Or who even prefer a bike or subway to get around town.

Forget winding, cliff-side roads and desert vistas. The new i3 teasers all show the vehicle in an urban, city setting.

One shows a couple of well-dressed "Sex and the City" types striding across the sidewalk while the i3 recharges at a sidewalk station. "The all-electric BMW i3 is more than just a new automobile. It fulfills a promise: the reinvention of urban mobility," reads the copy in the ad.

Other print ads under the theme "Born Electric" show the i3 in action, jockeying for position with yellow taxi cabs on busy city streets. The tagline: "As promised. The all-electric BMW i3." 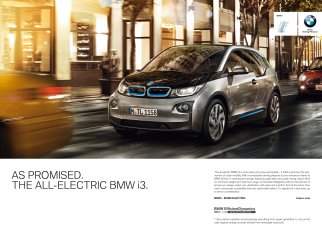 One of the print ads for the BMW i3 EV

BMW's German ad agency, Dorten, Berlin and Stuttgart, shot the new print ads in Los Angeles. BMW said it deliberately avoided abstract scenes in favor of everyday situations that would be familiar with its urban target audience. A new TV campaign shot between the high-rises of downtown Chicago will debut in November, when the car goes on sale in Europe.

Steven Althaus, the global head of marketing for BMW, said all the marketing is designed to get consumers to test-drive the i3 and find out how much fun it is to drive.

The car combines the sporting genes of a typical BMW with features designed for the urban driver. The i3's rear doors, for example, are "coach" doors that open from the front rather than the back. That will make it easier for passengers to enter and exit on busy city streets.

Mr. Althaus declined to bite on the BMW vs. Tesla rivalry. But he said BMW is not worried about slow sales of electric vehicles in America -- or the crash and burn of other ballyhooed EV contenders such as Fisker Automotive.

Optimistic
"We're not chest beating. But we've given it good thought and worked hard for it. Now we're optimistic it will work out," said Mr. Atlhaus.

Feedback from test-drive customers indicate BMW's on the right track, he said. Several BMW executives stated i3's real ace in the hole is the power of their brand's reputation as the Ultimate Driving Machine.

Despite early optimism, EV's have not set the automotive world on fire. Hybrids, plug-in hybrids and EV's account for only 3.6% of the global auto market, said Jeremy Acevedo, an analyst with Edmunds.com. Electric Vehicles, such as Tesla, Nissan Leaf and Chevrolet Volt, make up less than 1% of sales.

"If I'm a manufacturer, I'm more concerned if I'm GM or Nissan in this situation," said Mr. Acevedo.

And with politicians such as President Barack Obama and New York City Mayor Michael Bloomberg urging manufacturers to fast-track EV development, competition is heating up.

Said Mr. Acevedo: "Nobody wants to be left behind one this one. You have price wars starting. The manufacturers are all vying for that top spot. Everybody wants to be the Prius of this EV generation."