New Book Reports 37% of All Advertising Is Wasted

Five-Year Research Project Tracked $1 Billion in Spending by 36 Major Marketers
READ THIS NEXT
What retail marketers are prioritizing for the post-pandemic era
The findings of 'What Sticks' are the result of five years of research on campaigns from 36 of the nation's top advertisers. | ALSO: Comment on this article in the 'Your Opinion' box below.
Credit: Hoag Levins

CINCINNATI (AdAge.com) -- John Wanamaker was wrong. Only 37.3% of advertising budgets are wasted. 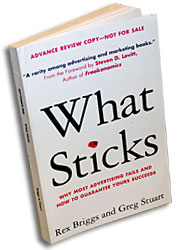 The findings of 'What Sticks' are the result of five years of research on campaigns from 36 of the nation's top advertisers. | ALSO: Comment on this article in the 'Your Opinion' box below.
Credit:
Hoag Levins
$1 billion tracked

While that's hardly good news, given that it still amounts to tens of billions of marketing dollars, a book that traces $1 billion in spending finds that it is at least possible to find out exactly what's wasted -- and how to get better performance from the other 62.7%, offering hope that battered business can rise from the mat.

The bold proclamations in "What Sticks: Why Most Advertising Fails and How to Guarantee Yours Succeeds," to be released next month by Kaplan Publishing, are the result of five years of research on campaigns from 36 of the nation's top advertisers. The book, penned by Rex Briggs, a veteran market researcher and founder of the firm Marketing Evolution, and Greg Stuart, CEO of the Interactive Advertising Bureau, may well be the most important advertising research since the "How Advertising Works" study of the early 1990s.

Although its conclusions are based on number-crunching done with such marketing titans as Procter & Gamble, Johnson & Johnson, Unilever, Kraft Foods and McDonald's, the book is written accessibly enough to find an audience among all marketers and creatives. And it comes copiously praised in a foreword by Steven D. Levitt, author of the pop economics hit "Freakonomics."

The title reference to marketing's age-old scatological adage provides a flavor of what's inside. Sometimes-surprising findings from research conducted across a wide range of brands, industries and media are punctuated by shocking anecdotes and confessions illustrating how broken and dysfunctional the marketing industry truly is.

"I spent the first decade of my career as an agency media guy," Mr. Stuart said in an interview. "I felt like a charlatan the entire time. ... I knew in my heart of hearts that we collectively, not just Greg Stuart, did not know what we were doing in spending clients' money."

An ad exec's apology
The book is something of a marketing 12-step program for Mr. Stuart, who in a footnote actually apologizes to each of his clients from that era by corporate name, including American Express, PepsiCo's Frito-Lay, Apple and Sears.

Contained in the book's initial chapters are some remarkable revelations, including the allegation that two of the Big Three automakers used to base their annual media budgets on one another's prior-year measured-media spending. The authors discovered that many longstanding axioms of media planning were based on nothing more than hunch and legend. They reveal how frequently marketers disregard research when it doesn't jibe with their own opinions -- or seek out research that does.

When the authors presented their findings to one automaker's marketing team, according to the book, the company's research people said: "We don't believe anything our agency brings to us, this study included."

Unable to define success
Ad agencies, the target of nearly nonstop flagellation both self-inflicted and otherwise in the past decade, may find some solace in the book. It pins much of the blame for marketing's woes on marketers and their failure to even define success for campaigns at the outset -- much less measure it properly on the back end. Of the 36 marketers the authors researched, only two -- P&G and Cingular -- had a clear definition of success for each marketing effort at the outset, Mr. Briggs said in an interview.

The book actually comes across as remarkably hopeful amid a growing genre of "advertising is dying, and we're all going to get fired" literature. TV advertising clearly works, according to numerous studies reported in the book. It just may not deliver returns as good as those provided by other media overlooked because of organizational inertia or a lack of rigorous, ongoing ROI tracking.

"No one ever got fired for using television," the book says, citing an internal J&J adage -- one that appears to have become outmoded of late as the company, since its work with Marketing Evolution, has increasingly branched into new media and creative approaches, not to mention that J&J sat out this year's upfront.

Fear of failure
The authors cite fear of failure -- and firing -- as possibly the biggest problem for marketers seeking to improve ROI. The core of the book is a description of and entreaty for a "commercial optimization process" covering messaging strategy, creative and media planning -- a sort of Six Sigma for marketing. But like any continuous improvement program, it requires analysis of failure, which has become almost impossible for some to admit for fear they'll be fired.

Mr. Briggs said the 36 marketers ranged from the highly analytical P&G and J&J to the highly instinct-driven Target, where he said Chairman-CEO Robert J. Ulrich makes snap judgments on creative executions displayed in the corporate lobby. Both approaches work, he said. "But what's been a common theme is that as the world becomes increasingly complex with media choices, it's harder and harder to do what Target's CEO does ... to use their gut that effectively."