The two bombs that ripped through the Boston Marathon, leaving at least three victims dead and at least 130 injured Monday afternoon, also touched the marketing and media community. The explosions led to local ad agencies scrambling to account for staffers in the races, while Twitter served as an information source as many brands went dark for several hours on social media in the wake of the tragedy. 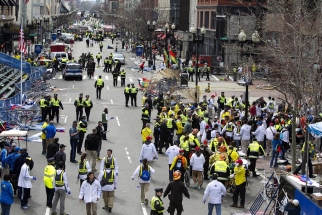 Numerous Boston-based agencies --including Interpublic Group of Cos.' Hill Holliday and Mullen, Havas-owned Arnold, Omnicom Group's Communispace and Publicis Groupe's Digitas -- rushed to track down employees and account for their safety yesterday afternoon. After a couple hours, Diane Hessan, CEO of Communispace, tweeted that her team was safe. By late evening Digitas, which had five staffers running the race, confirmed they were unharmed.

Also running the race was Foursquare CEO Dennis Crowley, who live-tweeted much of the experience.

Google set up its Person Finder page, a registry and message board that allows victims, family and friends to share information about their whereabouts and safety. Google created the app in response to the 2010 earthquake in Haiti.

The horrifying scene at one of the world's most popular marathons led the NBA's Boston Celtics and NHL's Boston Bruins to cancel scheduled games Monday and Tuesday nights. The Boston Marathon and corporate sponsors such as Poland Spring and Sam Adams expressed shock and sympathy with the victims. President Barack Obama pledged the full support of the FBI to track down and punish the still-unknown perpetrators.

Sports leagues had to make fast decisions about today's games, which also had an effect on advertisers. Around 8:15 p.m. Monday night, the NBA announced it was canceling the Celtics' scheduled Tuesday night home game in Boston against the Indiana Pacers.

"Our thoughts and prayers are with all those affected by the devastating events in Boston. While we don't think it's appropriate to get into specifics, we regularly practice a wide range of state-of-the-art security measures in all of our arenas," said league spokesman Mike Bass. "We will continue to work with our arena and team partners, along with local law enforcement, to be proactive around the perimeter of venues and to maintain a high level of vigilance as always."

The NHL also canceled its scheduled Bruins-Ottawa Senators game, saying in a statement: "The National Hockey League wishes to express its sympathy to all affected by the tragic events that took place in Boston earlier this afternoon."

"The safety of everyone that comes to our ballparks is always our top priority and we will continue to do everything to ensure a safe environment for our fans," Mr. Bourne said.

The Boston Marathon attracts major corporate sponsors such as Nestle's Poland Springs, local brewer Sam Adams, Nissan, Adidas and Gatorade. Poland Spring served as official bottled water for the 117th running of the marathon. All employees who volunteered to hand out water to runners at the event appeared to be OK, said spokeswoman Jane Lazgin.

"Our hearts go out to the runners and volunteers and all the residents of Boston -- and mostly to the families so sadly affected by this tragedy," Ms. Lazgin said.