NEW YORK (AdAge.com) -- As BP feverishly works to corral the thousands of gallons of crude oil its damaged well has pumped into the Gulf of Mexico since April 20, it is also fighting a major image crisis. But much like trying to clear up the oil oozing in every direction in the Gulf, its PR crisis may also soon turn into an impossible battle -- and that is partly due to a successful marketing campaign that pitches the company as environmentally friendly. 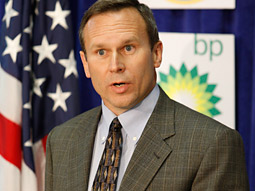 BP Chief Operating Officer Doug Suttles speaks at a news conference about the oil spill.
Because BP has long waved the "green" flag, the oil giant seeming so unprepared for a catastrophe of this magnitude puts the ad campaign at odds with reality. The company's "Beyond Petroleum" campaign, launched with the help of Ogilvy & Mather almost 10 years ago, was seen as a case study in rebranding -- even if it caused similar perception problems in previous incidents. Indeed, in an ironic twist, the company was recently named as a finalist for a federal award honoring offshore oil companies displaying "outstanding safety and pollution prevention."

The disconnect has come off as shocking even to crisis experts, including Harlan Loeb, U.S. director crisis and issues management at Edelman.

"This kind of event should clearly have been contemplated in their crisis simulations," Mr. Loeb said. "BP is an enormous actor in offshore drilling and exploration and the fact that this kind of event took place, while tragic and horrible, should not leave BP looking totally unprepared."

Following Toyota's crisis approach?
If it appears that the company is following Toyota's crisis playbook, Mr. Loeb said people shouldn't be too surprised by that. He said BP, much like Toyota, is a very centralized company, which tends to result in a non-efficient and non-comprehensive decision-making process when a crisis strikes.

"It troubles me that as of yesterday the governor of Louisiana was still waiting for a contingency plan from BP," Mr. Loeb said. "It wouldn't shock me if the attorneys general of the affected states intervene and pursue BP on some legal front, compelling them to step up with a contingency plan. It's beginning to spin out of control for them."

What troubles Mr. Loeb most is that not only does BP lack a visible presence in the news cycle, which it has not managed to get out in front of, but the reports that BP was offering $5,000 settlements to residents if they waived their rights to sue for any damages. "That's a profoundly disturbing message to have resonating as one of your first public messages," Mr. Loeb said. "When the public sees the company leading with a legal protection agenda trying to limit legal exposure, it's not a good thing. The next shoe to drop is usually the attorney general intervening to remind the company of its obligations. Perception-wise, this is out of control. Operationally it's an enormous issue but they are not at all visible."

Gene Grabowski, senior VP-chair of crisis and litigation for Levick Strategic Communications, said BP got off to a shaky start in trying to get control of the situation and looked especially weak when the federal government had to step in and help out. "Their messaging should have been more focused on what a challenge it was and how they were actively working with the government, Coast Guard and the Navy rather than the statements we saw from their chief operating officer and others that basically said, 'We can't handle this, we will take help anywhere we can get it,'" Mr. Grabowski said. "It almost looked as if they had taken their hands off the steering wheel."

It also doesn't help that the Obama administration has taken some lumps for being slow to react and is keen on keeping the focus on BP rather than on the federal government's response time. Cabinet members made the rounds on Sunday talk shows emphasizing BP's responsibility -- financial and otherwise.

What to do going forward
Mr. Grabowski thinks the company improved its position a bit over the weekend but wants to see three things from them going forward, including progress reports on the counter wells it is digging, better control of the images and pictures coming out of the region, and to continue the transparency it "began over the weekend."

"We need to see that BP is an organization made up of regular people who are hard at work to protect us and the environment and images of BP executives with their sleeves rolled up in the boardroom, like J&J did with CEO Jim Burke back in the 1980's," Mr. Grabowski said. "And this can't be a mystery. Transparency will relieve pressure on the company and probably mitigate liability and save themselves in hundreds of millions in litigation if it shows us they are making a good-faith effort and can connect with us on a human level."

Mr. Grabowski said social media is probably the most important avenue for BP to utilize right now and that it should put all of its marketing efforts aside for the time being. "BP is in a situation similar to a nation at war and have to put every effort behind winning that war," Mr. Grabowski said.

A call into BP's U.S. press office directs callers to a recently launched website where one can join a mailing list or submit an inquiry via e-mail. The site also provides links to a number of social-media outlets for updates, including Facebook, Twitter, Flickr and YouTube. It also provides state information for Louisiana, Alabama, Mississippi and Florida as well as are-contingency plans for New Orleans; Morgan City, La.; and Mobile, Ala.

Of course, all the social media in the world won't do much if millions of gallons of oil wash ashore, crippling the fishing industry in Louisiana and Mississippi or destroying the white-sand beaches (and tourism trade) in Alabama and Florida.

Asked if BP appears to have learned anything from Toyota, Edelman's Mr. Loeb said if it has, he hasn't seen it yet.

"The challenge in the face of crisis is to rise above the narrative of the crisis," he said. "A company has to have a contingency plan to rise above the static and communicate a clear and comprehensive message. Toyota taught us that very clearly and it's not clear that the lesson has been heeded by BP."