Pink-Labeled Cans a Hit With Kroger Customers
READ THIS NEXT
Dodge pays homage to history with EV logo
Pink Breast Cancer Awareness labels doubled the sales of Campbell's soups in Kroger stores. | ALSO: Comment on this article in the 'Your Opinion' box below.
Credit: 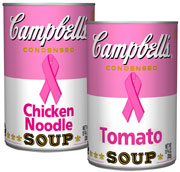 Pink Breast Cancer Awareness labels doubled the sales of Campbell's soups in Kroger stores. | ALSO: Comment on this article in the 'Your Opinion' box below.

Annual promotion
Tied to Kroger Co.'s annual Susan G. Komen Breast Cancer Foundation promotion, the pink-ribbon cans of condensed tomato and chicken-noodle soup have helped Campbell sell 7 million cans to Kroger for the crucial month of October when it normally sells the chain only 3.5 million cans. The effort also has gotten Campbell incremental displays outside the soup aisle at Kroger.

Although the pink soup cans are not guaranteed to sell out in October and thus could be carried over into the following month, Campbell spokesman John Faulkner said the hope is that the novelty of the beribboned cans together with the donation to the cause will be enough to sell out in the 2,500 Krogers they will appear in across the country this month.

Other retail partners
"We certainly think there is the possibility of greater sales since our typical soup consumers are women and breast cancer is a cause they're concerned about," Mr. Faulkner said. The Kroger effort is a test of the popularity of the pink soup cans and Mr. Faulkner said he would "love to see the program expanded greatly next year" with other retail partners.

According to a 2004 survey on cause marketing done by Boston brand-strategy firm Cone, 91% of 1,033 consumers say they have a more positive image of a company or product when it supports a cause and 90% will consider switching to another company if it's aligned with a cause.

Big payoff
Breast cancer in particular has been an increasingly popular cause for marketers to align with. Campbell will donate $250,000, or roughly 3.5 cents per pink can, to the Susan G. Komen Foundation through Kroger in exchange for its doubled order. The potential payoff is big for the company, even after the donation is deducted.

Unilever (partnering with Walgreen's) also links with the cause, doing tie-ins for the American Cancer Society's breast-cancer initiative in May, timed to Mother's Day.