Thanks to Bud, Corona Has a Bummer of a Summer | Ad Age
Skip to main content
Sign In Register

Thanks to Bud, Corona Has a Bummer of a Summer

CHICAGO (AdAge.com) -- The results of the U.S. beer industry's critical summer selling season are in: Bud Light Lime won, newly merged Coors and Miller canceled each other out and Corona, once king of the beach, got sand kicked in its eye.

The first-ever flavor extension of Bud Light, launched in May with a $35 million national marketing push, hit the million-barrel mark with little apparent cannibalization of its sibling brands, driving parent Anheuser-Busch to its strongest summer in recent years. The No. 1 brewer's total sales have risen nearly 2% year to date, according to scanner data from Information Resources Inc.

While A-B, with its powerful distribution system and marketing machine, has in the past been able to quickly propel brands to significant market share -- as it did with 2005's launch of Budweiser Select -- those gains have often come at the expense of its other brands.

That didn't happen this time.

'Striking success'
A-B estimates that 50% of Lime drinkers either are new to beer or are buying it in addition to their existing beer habits, while another 20% of drinkers are coming from competitors such as Miller Chill and Corona. Only 30% of Lime drinkers switched from other brands in A-B's portfolio, which accounts for nearly 50% of the total U.S. beer business.

A-B's results were particularly notable because they came in the midst of the at-first hostile but ultimately friendly takeover bid for the company by InBev, an event that had the potential to be a massive distraction from A-B's oft-stated intention to capitalize on uncertainty at the newly minted MillerCoors.

"The most important thing for us was to keep it all separate," said A-B's top marketer, Dave Peacock. "It was our job to exploit [any disruptions at MillerCoors], and I think we did that."

Mixed bag
But MillerCoors, which spent much of the summer operating essentially as the two distinct marketers it intends to integrate, saw widely disparate results. Coors' legacy brands showed little impact of any disruption from the joint venture, and its sales have risen an industry-best 6% so far this year.

But those gains were not enough to offset the larger Miller portfolio's 2.1% decline.

Miller's problem: Second-year sales of lime-flavored Miller Chill, which boosted its results when it launched last year, have fallen at mid-double-digit levels for most of the summer, as drinkers have apparently either flocked to Bud Light Lime or lost interest as Miller Chill's novelty faded.

A MillerCoors spokesman disputed Mr. Peacock's claim that the brewer had been distracted, citing its success in gaining shelf space at key national retail chains and in holding its pricing steady. He also said Coors Light continues to grow at a faster pace than Bud Light.

Price, competition increase
Corona, however, may find its results harder to spin. The leading import saw its sales fall for the first time in 16 years last year, a drop it attributed to a price increase and not to increased competition from brands such as Bud Light Lime, Miller Chill, and Heineken USA's Dos Equis and Tecate.

"Management acknowledged that Corona volume growth has been disappointing, and indeed recent IRI trends continue to show mid-single-digit volume declines, despite the fact that we are now a year and a half past the last price increase in January 2007," said Deutsche Bank analyst Marc Greenberg. (Mr. Greenberg recently interviewed executives at Constellation Brands, which owns half of Crown Imports, the joint venture that markets Corona in the U.S.) "There appears to be no simple answer to Corona's slowing." 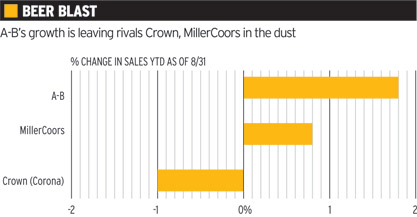