Anheuser-Busch Inbev is going back to reality, counting on a new wish-fulfillment show to boost Budweiser's credentials as a global brew.

Using social media to make a global casting call, the series, called "Bud United presents: The Big Time ," promises to tap pro sports stars, celebrity chefs and other big names to mentor aspiring athletes, cooks, supermodels and more. Training sessions will be aired via as many as 10 episodes that might eventually run on TV.

"We're currently talking to some network partners because there's a lot of interest in this type of celebrity content and the nature of what we're presenting here," Jason Warner , global VP-Budweiser, told Ad Age . He declined to detail those discussions. 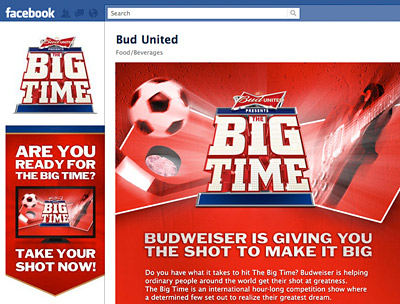 "The Big Time " begins online, where Bud today will begin soliciting video applications on social-media sites, including Facebook and Chinese site Renren. Executives said episodes could air on TV late this year or early next.

Budweiser is a major priority for Belgium-based A-B InBev, created by the Anheuser-Busch/InBev merger in 2008. Executives eye Bud as a potential international powerhouse on the scale of Coca-Cola. Last year the brewer began running a campaign by Anomaly called "Grab Some Buds," which is running in several international markets and meant to position the brew to a younger audience. But sales remain soft, especially in the U.S., where Bud shipments were down 7.3% in 2010, according to Beer Marketer's Insights. Global shipments declined 2.3% in the first quarter, A-B InBev reported.

The creative team behind the new effort includes Anomaly , production company Radical.media, and Evan Weinstein, co-executive producer of "The Amazing Race." Mr. Weinstein said the show will stand out among other wish-fulfillment programs because "We're not just grabbing Joe Blow off the street ," but "actively searching for people who genuinely have the skills to work in a field, whether it be pitching baseball, driving Nascar, singing [or] performing in front of a large audience." But "life has ... prevented them for some reason from pursuing this dream."

Each hour-long episode will feature four contestants, who will be mentored, tested and challenged by stars. So far, the brewer has signed up Nascar driver Kevin Harvick (part of the No. 29 Budweiser Chevrolet team) and celebrity chef Hubert Keller. Experts "ultimately will judge which of these four people they think deserves their shot at the big time," he said.

Bud has had mixed results with original content. Executives count the World Cup program as a success, generating 4.4 million YouTube views and helping the brand add 1 million Facebook fans. But who can forget Bud.TV? The online play was launched in 2007 to great fanfare but eventually pulled in 2009 after getting so few hits that ComScore couldn't measure it.