Budweiser Cans Get a New Look -- the Bow Tie

The King of Beers is getting a facelift.

Anheuser-Busch is rolling out new Budweiser cans that update the design for the first time since 2001, seeking to give the brew a more contemporary look as A-B continues to reach out to younger drinkers. The cans, which will hit stores soon, feature a lot more red and prominently display the brand's iconic bow tie, which has long been on bottles but never on cans. 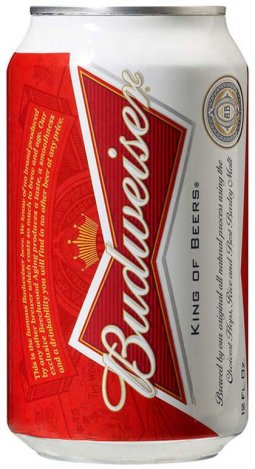 The new cans -- representing only the 12th time A-B has changed the design since first putting Bud in cans in 1936 -- come after 18 months of study and testing, said Rob McCarthy, VP of Budweiser. "The bow tie and the prominence of the bow tie came through both for current drinkers and for potential drinkers as just a powerful symbol of the quality and heritage and authenticity of the brand," Mr. McCarthy told Ad Age . "And it's also a contemporary visual for beer drinkers," he added, noting that the bow tie is "very bold but also not too bold. It says we are a confident brand but also not too in your face."

It is also a bit mysterious. A-B has no documentation on the origin of the bow tie, but company lore suggests that it was created to encourage drinkers to use the beer's full name, not simply "Bud." The word Budweiser scrolls in cursive across the bow tie.

Ironically, Budweiser's ongoing campaign emphasizes "Bud," with the tagline "Grab Some Buds." The phrase is featured in ads by Bud agency Anomaly that seek to reach out to younger drinkers with music-filled spots featuring scenes of cookouts, baseball, rock concerts and a young couple kissing at a bar. Mr. McCarthy said the brewer likes the Bud "bar call" but that the brand name Budweiser "is still very important." The new can will be promoted in ads by Anomaly , as well as digital, print and out-of -home advertising. A-B worked with London design firm Jones Knowles Ritchie on the new look.

The new cans come as Budweiser seeks to reverse a two-decade-plus sales decline that this year has it in danger of being surpassed by MillerCoors' Coors Light as the nation's No. 2 best-selling brew behind Bud Light. Beer trade publication Beer Marketer's Insights -- which first predicted Bud's fall from No. 2 many months ago -- reported this week that Bud has posted better results recently, but it's "likely too late to prevent it from becoming [the] No. 3 brand in the U.S. in 2011."

Although improving, Budweiser sales volume though July 10 was still down 3.7% year-to-date in grocery sales, while Coors Light was up 2.6%, Beer Marketer's Insights reported, citing SymphonyIRI data. Beer Marketer's Insights, which tracks shipment data to wholesalers for beer sold in both groceries and at bars, said that Coors Light might have already passed Bud, although it is "too close to call definitively." But if it hasn't happened already, "it looks increasingly inevitable that Coors Light will pass Bud by late summer," the publication stated.

The new cans come in the wake of Bud's limited-time rollout this summer of special American flag-styled cans, which apparently were a hit on store shelves. Beer Marketer's noted that Bud sales were up 1% for the three weeks surrounding the Fourth of July.