CHICAGO (AdAge.com) -- You know that famous target of Burger King, the "superfan" that the chain has been courting with edgy campaigns such as "Whopper Virgins" and "SpongeBob SquareButt?" Well, it turns out a bunch of them qualify for AARP cards.

After years of talking about how it's targeting young males who consume prodigious amounts of fast food, the Miami chain's description of its target has recently become a lot more expansive. "The superfan is merely a term coined by Burger King to describe the fast-food hamburger-restaurant industry's most frequent user," Burger King CEO John Chidsey told investors during an earnings conference call last week. "To clarify, it's not just 18- to 34-year-old males, it's all ages and all household demographics, with over half of them having children. And interestingly, over 29% are 50 years of age or older."

The actual qualification for a Burger King "superfan" is anyone who eats fast-food nine or 10 times per month. Interim CMO Mike Kappitt said the chain buys media targeting 18- to 49-year-olds.

This is, of course, coming from the brand that brought you poultry in garters and a variety of international outdoor work that managed to stir controversy back home, such as the "Super Seven Incher." Now the chain is courting the very same ladies it's happily risked alienating, with lower-calorie "Positive Steps" combos slated for promotion in women's magazines. The company has also signed on to do another "Twilight" promotion this summer, for what is now being called the "female superfan." It seems a bit of a shift for a company whose franchisees have in recent years fretted that the brand's advertising would alienate women, seniors and minorities.

Burger King appears to be broadening its once laser-like focus for a whopper of a reason: Sales have been slipping for nearly a year. Burger King's same-store sales dropped 3.3% in the U.S. and Canada for its second fiscal quarter ended Dec. 31 compared to a 1.9% increase the year before. This period coincides with Burger King's implementation of its controversial dollar double cheeseburger, for which franchisees twice refused to approve advertising funds. When the promotion was mandated, however, U.S. traffic increased, but average sales fell. Franchisees have said that sales and traffic have continued to slip since the beginning of the year.

Franchisees
Burger King warned, as did McDonald's in its earnings last month, that no "dramatic turnaround" is expected while unemployment and underemployment stays at current levels, and certainly not for the next three to six months. In the meantime, Mr. Chidsey underscored that Burger King is taking steps to ensure that the company is ready to grow as the economy improves -- including repairing the strained relationship with its franchisee base.

The company is embroiled in two lawsuits with franchisees, both pertaining to advertising and marketing initiatives. Franchisees sued the company last spring over a proposed diversion of rebates from soda companies. Operators have traditionally used this money for restaurant repairs but Burger King boasted that access to the funds would allow the chain to boost advertising impressions by 25% in 2010. Ongoing litigation has led analysts, however, to doubt whether the increases would be realized. As a result, many of them downgraded the company's stock last month. Mr. Chidsey said that he recently met with a franchisee group, and expects the matter to be resolved as early as this week.

As for the other major franchisee lawsuit, relating to the dollar double-cheeseburger promotion that operators twice voted down, Mr. Chidsey said the company has been testing ways to take it off the menu without losing the customers who now expect it. More value products are slated for the coming months, and he said the company will have more news on the fate of the double cheeseburger "in the next month or so." 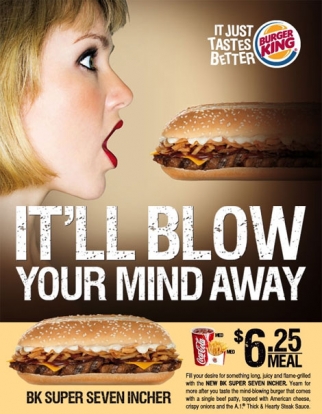 SUPER CONTROVERSY: BK is now courting the women it once risked alienating with ads like this one.

Premium products are also in the offing, with the long-awaited launch of its Steakhouse XT burger at $3.99 and ribs coming later this year. The chain is also planning stuffed burgers and limited-time chicken offers, in addition to value-oriented breakfast products slated for April. Mr. Chidsey highlighted the Steakhouse XT and a gaming promotion for Twilight "Eclipse," both recently approved by franchisees, as proof that things are moving forward.

"There is a lot of mythology out there that somehow we are not able to get things done," he said. "But when you lay out the right business case and people see what's in it for them, they'll vote yes." Of course, it's still a tough environment, and "anytime sales aren't positive you're going to have discontent," he said, noting that management is moving forward.

Burger King is also in the midst of a search to replace departed global CMO Russ Klein. Mr. Chidsey said the company is still interviewing candidates, and expects to make an announcement about his replacement within a few months.