Plus, what it's like to be transgender in the advertising industry
READ THIS NEXT
Walgreens names Starbucks' Roz Brewer as CEO, reports WSJ 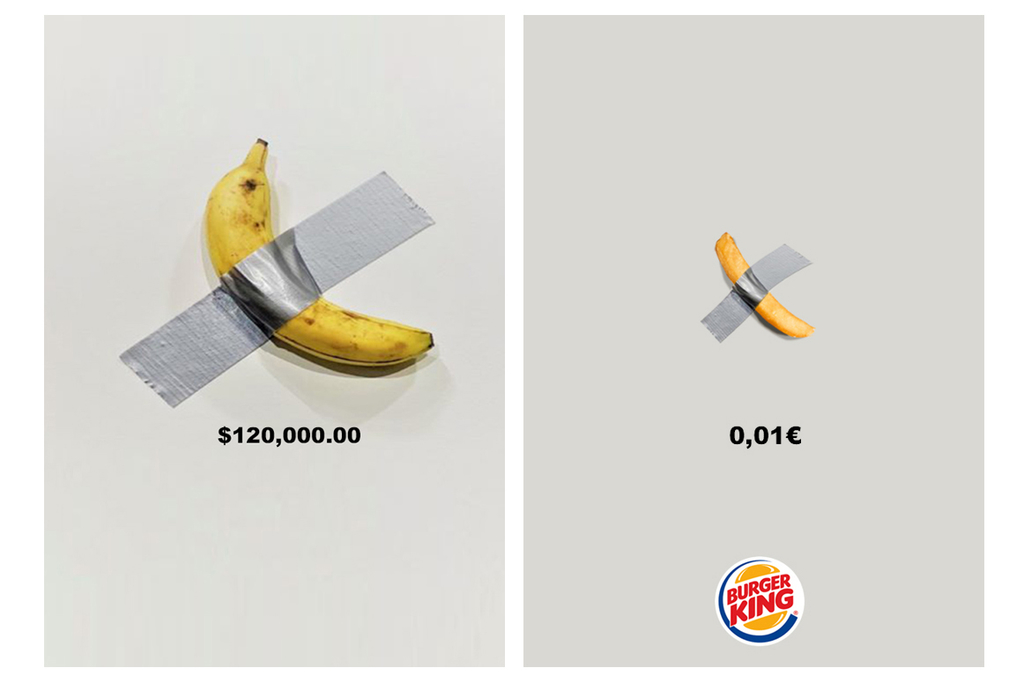 Burger King trolls the Art Basel banana
After the weekend saga of the Art Basel banana (see yesterday’s Wake-Up Call), it was probably only a matter of time before advertisers had something to say about the rotting fruit duct-taped to a wall that sold for $120,000.

Burger King was one of the first with a quick piece of thinking by Paris-based agency Buzzman (which has been responsible for some outrageous stunts in the past like billboards mocking people who don’t have a BK in their town) trolling the Maurizio Cattelan artwork.

As Ad Age’s Ann-Christine Diaz writes, “it jumped into the conversation with social media featuring a French fry taped to a wall—but it will leave the eater only one euro cent poorer.” The post is titled “N’avalez pas n’importe quoi”: translation, be careful what you swallow.

Inevitably, Burger King isn’t the only advertiser jumping onto the banana bandwagon. In Turkey, home and garden store Tekzen used the idea in an Instagram post advertising guess what? Duct tape.

Peloton CEO is silent on ad
John Foley, CEO and co-founder of Peloton, was a speaker at at the UBS annual tech and media conference Monday morning, and with his brand so much in the news, attendees were eager to see what he had to say.  However, as Ad Age’s Adrianne Pasquarelli reports from the conference, he completely avoided mention of the one thing on people’s minds: the brand’s much-mocked commercial “The Gift that Gives Back.”

Instead, writes Pasquarelli, Foley spoke about the challenge Peloton faces in “convincing shoppers that Peloton is actually an affordable and value-laden brand.” Speaking about what he called the brand's "insane value" for money, he said: “We’re changing lives, allowing people to get more fit, more healthy, more endorphins…be better versions of themselves and all this existential stuff, but we need to communicate that better.” Hmmm.

Meanwhile, the Peloton mockery continues: "Saturday Night Live" offered up a Melania Trump- Peloton mashup in which Melania, played by Cecily Strong, asks: “Are you scared woman who’s trapped inside a mansion? Why not imagine biking away from it all—on Peloton. Merry Christmas to me.”

Transgender in the ad industry
What's it like to be transgender or non-binary in the ad industry? Things may be changing but execs have faced an uphill struggle, writes Ad Age’s I-Hsien Sherwood, who talked to several people about their experiences and uncovered some of the (sometimes shocking) discrimination they have faced in their careers.

For example: Cossette VP of Content Experience Chris Bergeron describes how in a previous agency, a client on an account she had won objected to her presence, demanding “that thing” be taken off the account. Meanwhile Britt Meyer, a genderqueer art director at Arc Worldwide, describes how it feels to have someone call you by the wrong pronoun.

“The first time, I get it, it’s a mistake. The second time is like, ‘Oh yeah, you really should try a little bit harder.’ And then by the fifth time it makes me think that you just don’t give a shit, like you don’t care who I am.”

Read more here, and find out how the situation is gradually improving as agencies strive to increase diversity.

Just briefly
Nike protest: Nike workers staged a protest yesterday over the company’s treatment of women and female athletes. The Wall Street Journal reports that employees at its Oregon headquarters marched in an event not sanctioned by the company, with some holding placards saying "Empower women.”

Departing: Publicis Groupe Chief Diversity Officer Sandra Sims-Williams is leaving to become senior VP of diversity and inclusion for Nielsen, reports Ad Age’s Lindsay Rittenhouse. Her exit is the latest in a series of departures at Publicis, including that of Emma Montgomery, Leo Burnett Chicago president and chief strategy officer, last week.

Woof: SoftBank has sold its stake in Wag, the dog-walking start-up, back to the company at a loss, reports The New York Times. SoftBank two years ago agreed to invest $300 million in the company.

Sorry: Walmart Canada has removed a Christmas sweater with an apparent drug reference from its website, according to CNN. Sold by a third-party seller, it featured an image of Santa Claus behind a table with three white lines and the phrase "Let it snow."

Podcast of the Day: In the latest episode of Ad Age’s Ad Block podcast, Toygar Bazarkaya, global chief creative officer at brand experience agency Optimist, talks about growing up Turkish in Germany, hitchhiking round Europe to see art exhibits and a diet that he says lets him lose weight and still indulge his sweet tooth. You can listen to it here.

Campaign of the day: TikTok has joined the likes of YouTube and Google in creating a year-end highlights reel, with the help of agency Adam&EveNYC. If you want to know what your kids were watching this year, it features, as I-Hsien Sherwood writes, a short-lived “cheese-slapping” trend, a man who strapped carrots to his feet, lots of dancing animals and plenty of lip-syncing to “Old Town Road.” Watch it here, and  don’t forget to check out Creativity’s Top 5 campaigns from last week, including Instagram’s ad with Celine Dion mourning the '90s in a remake of her video for “It’s All Coming Back to Me Now.”