Pass the butter -- er, margarine. Or is it the olive-oil spread?

In the so-called oil-and-fats category, it's getting tougher to tell which is which. Butter giant Land O'Lakes is adding olive oil to some of its sticks, marking what it says is a category first. Meanwhile, a canola-oil-blended butter spread continues to gain attention, and some versions also include, you guessed it, olive oil. At the same time, brands are adding dashes of sea salt, cinnamon and sugar to spice up what was once a pretty mundane dairy staple. 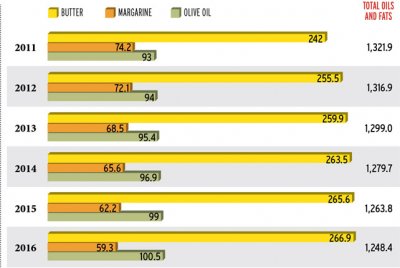 Retail volume forecast of oils and fats, in millions of tons

But one thing is for sure. In its race against margarine, butter is winning -- and even outpacing olive oil of late -- as consumers seek pure, simple, flavor-rich ingredients.

Marketers are making the changes to fend off private labels and appeal to millennials and other cooks seeking flavorful recipes, said Phil Lempert, a food-industry analyst who runs the website SupermarketGuru. "It's a category that was dormant for a long time and just started gaining innovation in past few years."

At stake is a piece of a mature -- but shrinking -- category. Retail dollar sales of oil and fats products will drop 5% from 2011 to 2016 in the U.S., according to a recent forecast by market researcher Euromonitor International. The reason is that more people will eat out as the economy improves. And when cooking at home, consumers will continue to seek more-healthful, oil-free methods, such as steaming or grilling, Euromonitor stated.

But butter seems to be gaining favor for people who still like to grease things up a bit. Grocery-unit sales of butter grew 2.19% in the year ending May 13, compared with a 0.21% uptick in olive oil and a 6.24% decline in margarine, spreads and butter blends, according to SymphonyIRI data, which excludes Walmart sales. Overall, butter led with $1.5 billion in sales during the period, followed by $1.4 billion for margarine/spreads and $706 million for olive oil.

Meanwhile, Euromonitor projects that butter will grow volume sales 10% from 2011 to 2016, while margarine will continue falling because it is viewed as an "artificial" product.

Still, Land O'Lakes, the nation's top butter brand by far with 25% share, is not taking the growth for granted. The marketer has formed a partnership with celebrity food blogger and "Pioneer Woman" Ree Drummond to push its new butter with olive oil and sea salt, which hits shelves earlier this year. The campaign, which includes ads in the fall on the Food Network and Cooking Channel, aims to persuade younger generations to buy the new butter for uses in which regular olive oil has stolen share, such as sauteing and pan frying.

Butter gives food a creamy, rich flavor, and the olive oil makes it soften quicker while giving it a slightly higher smoke point (meaning it won't burn as fast), said Heather Anfang, Land O'Lakes' marketing director for retail butter and spreads. The launch follows last year's rollout of a butter spread with cinnamon and sugar, which Land O'Lakes encourages people to spread on toast or put in warm cereal.

Some health experts still favor margarine over butter. In a recent staff blog, Mayo Clinic dietician Jennifer Nelson wrote that margarine is usually better for heart health because it's made from vegetable oils and has no cholesterol.

Butter, she notes, is an animal fat containing cholesterol and "high levels of saturated fat."

Margarine, which was created by a French scientist in the late 1800s at the request of Emperor Louis Napoleon III, gained favor in the U.S. in the 1950s when coloring-ban laws were lifted. (Margarine, historically opposed by the dairy industry, is naturally white.) But in more recent years margarine faced a backlash because it contains trans fat, which became a health villain because it increases the risk of heart disease. Marketers have responded by taking it out.

Unilever, for instance, has removed trans fats from soft spread brands such as Country Crock and I Can't Believe It's Not Butter. The latter in January launched a campaign called "Cheat on Butter" by Omnicom Group's DDB, Toronto that plugs it as having "fresh butter taste" but "70% less saturated fat." And since 2009, Country Crock has put more marketing behind a version with calcium and Vitamin D. About two months ago, Conagra added calcium to 45-ounce tubs of Blue Bonnet, seeking to bring a "better-for-you option within the value brands in the category," a spokeswoman said.

Meanwhile, Smart Balance in May launched nationally a line of "spreadable butters" with Omega-3s and a plant sterol that promises to "block the cholesterol in butter."

Spreadable butter, which combines butter with canola oil, was launched on a large scale in the U.S. by Land O'Lakes in 2000. The marketer now controls 90% of the spreadable-butter market, estimated Smart Balance CEO Stephen Hughes, who said the subcategory is worth about $130 million and growing. "We think [Land O'Lakes] did something very smart," he said in an interview. With the plant sterol, "we've evolved a next step above them where we've really provided the consumer with a risk-free, guilt-free butter." New TV ads by agency TBC, Baltimore, declare that "butter just got better." One version includes extra virgin olive oil.

Of course, spreadable butters are not immune to the kind of legal tussling long associated with the butter/margarine category. In California, Challenge Dairy Products and retailer Kroger Corp. recently faced a class-action lawsuit alleging the marketer's spreadable butter product was deceptive because it did not meet the state's definition for "butter" because it contains edible oils. The plaintiffs said the word "spread" -- to distinguish it from butter -- was printed in lettering that was too small. Lawyers for Challenge and Kroger argued that spreadable butter's main ingredient is a dairy product (cream churned into butter), therefore, it does not have to be labeled as a "spread." A state judge dismissed the complaint on grounds that it was pre-empted by federal law. The plaintiffs plan to appeal.