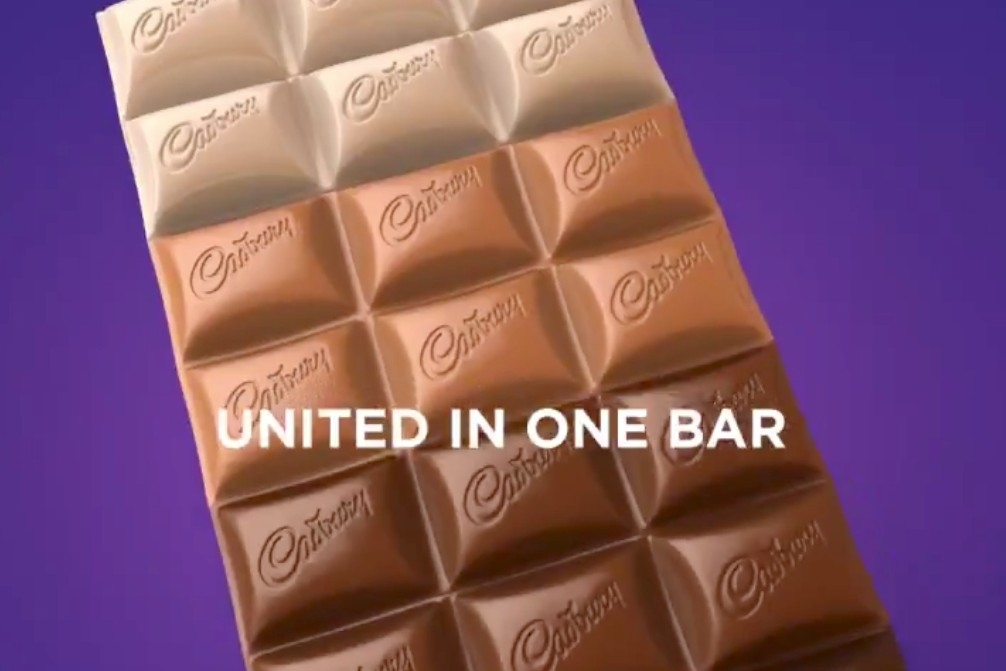 Cadbury’s Unity Bar proves rather … divisive
Cadbury’s new chocolate for the Indian market was well-intentioned. It used four different chocolates, from dark to white, in the same bar, promoting a pro-diversity message for the country’s Independence Day this month. The limited-edition Unity Bar, created out of Ogilvy Mumbai, encouraged solidarity between India's castes, religions, languages and regions, "because sweet things happen when we unite,” as the promotional film says.

But the product has exasperated some international viewers who spotted it online and found it simplistic and cloying. As Ad Age’s Ann-Christine Diaz writes, this isn’t the first time people have “scoffed at brand efforts to celebrate diversity through a more wide-ranging color palette (see Crayola's multicultural crayons).” In the case of Mondelēz International’s Cadbury, there also were questions about the presentation. Some people wondered why the dark and light squares of chocolate were “segregated” into groups instead of being all mixed together. And many rolled their eyes at marketers using candy to comment on intractable societal problems. New York Times restaurant critic Tejal Rao tweeted, “congratulations to Cadbury for solving racism.”

Coming Sept. 10
Apple set a date for its event to launch new iPhones: It’s happening Sept. 10 at the Steve Jobs Theater at the company’s headquarters in Cupertino, California. As Bloomberg News reports, the invitation featured a clue about what might be unveiled: “The image for the announcement features a multicolored Apple logo that may hint at new iPhone options.” As some observers pointed out, the cheerful colors in the invitation (violet, green, turquoise) were similar to the shades that Apple used in its old-school plastic iMacs G3s from 20 years ago. If NBC’s “Friends” can made a comeback, why not Apple’s late-’90s color scheme?

Juul gets (more) scrutiny
The Wall Street Journal reports that the Federal Trade Commission is "looking at whether Juul engaged in deceptive marketing, including by targeting minors or using influencers." Juul Labs, meanwhile, insists that it never marketed its e-cigarettes to youth, as Ad Age’s Garett Sloane writes. And it says its influencer program was no big deal: “We worked with fewer than 10 adults on JUUL-related content, and they were all smokers or former smokers over the age of 30,” the statement says. “JUUL spent less than $10,000 on influencers.” So were Juul’s early marketing efforts aimed at minors or not? Check out some shots from its multimillion-dollar 2015 marketing push and decide for yourself.

Just briefly:
Hmmm: Tesla prides itself on not advertising. But in China, “that tune has started to change as the automaker promotes racing events, showroom parties with DJs and a line of Chinese Tesla stickers for chat apps,” Reuters reports.

Hoops: Nissan “is now an official sponsor for NCAA men’s basketball, including the Final Four, giving it the rights to use trademarked phrases like March Madness,” Ad Age’s E.J. Schultz writes.

Headline of the day: “TSA bans Star Wars Coke bottles from flights because they look like bombs,” from The Verge.

Ad of the day: How does Kanye West feel about this? A Colorado restaurant chain, Hapa Sushi, is using his tweets in its new ads urging customers to "love your food as much as Kanye loves Kanye,”  Lindsay Rittenhouse writes in Ad Age. West has often gushed on Twitter about how much he appreciates himself. As in, “Have you ever thought you were in love with someone but then realized you were just staring in the mirror for 20 minutes?” May we all achieve that level of self-love someday. Happy Friday.

On Sept. 9 in Manhattan, Ad Age Next: D-to-C will bring together leading direct-to-consumer brands including Billie, Allbirds, ThirdLove, Rockets of Awesome and Hippo. Read how to sign up here.