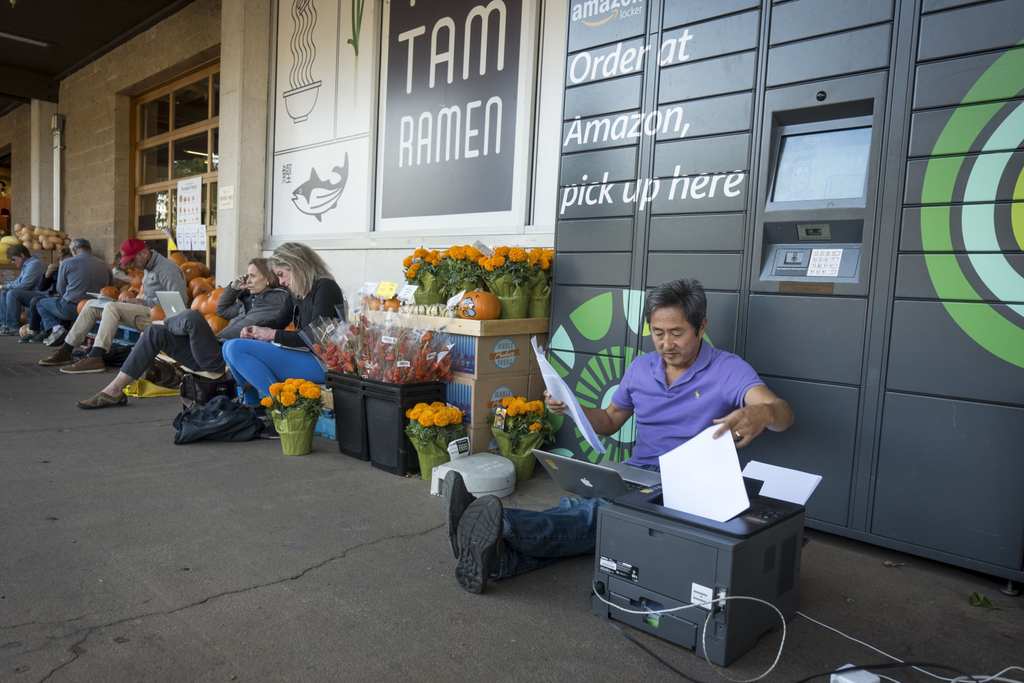 A man works on a laptop computer and printer outside a Whole Foods Market Inc. store in Mill Valley, Calif., on Tuesday. More than 1.5 million people are without power in California as utilities cut electricity yet again to prevent live wires from sparking wildfires in high winds.

As wildfires and electrical outages spread across California, ad agencies are shutting down offices and encouraging employees to work from home—where they are often joined by colleagues whose homes are without power.

BSSP, a full-service agency based in Sausalito, California, lost power for two days, says company President Patrick Kiss. Employees who still had electricity hosted their powerless Marin County colleagues so they wouldn’t lose time on projects. Other employees worked from a client’s office in Berkeley. “We’re back in the office 100 percent full-force today,” Kiss told Ad Age in an email.

72andSunny, an agency headquartered in Los Angeles’ Playa Vista neighborhood, activated a new emergency notification system to check in on employees. About a tenth of the agency’s team are in the city’s evacuation zone.

“We created a volunteer network of people who had spare rooms to host co-workers displaced by the fires,” says Bryan Smith, executive strategy director and partner at the agency. “We invited families whose schools had closed to stay home with their kids—or bring them (and their pets) into the office,” he told Ad Age in a statement.

Spokespersons for the agencies RPA, BBH and Omelet said their Los Angeles employees had thus far been mostly affected by heavy traffic and freeway closures. Some employees at Horizon Media’s L.A. office in Century City worked from home Wednesday to avoid getting caught in crippling traffic that created up to a three-hour commute for workers.

"At this point, they're wasting hours on the road instead of working like they could from home,” says Jazmin Chisolm, a receptionist in the company’s L.A. office. “It’s a safety hazard."

"While our offices are fully operational, we certainly have felt the impact of the fires and blackouts at our homes," says Michele Sileo, managing director and partner at the San Francisco-based agency, Eleven. "Luckily, we've been able to leverage the resources of our Chicago office as well to keep everything on track," she said in a statement. "San Franciscans are used to the fires that come along with the winds each year, but as they get worse, it's hard to see how they won't negatively impact many major businesses in the future."

Power outages have been rampant across the state as Pacific Gas and Electric, in an attempt to prevent fires, shut off electricity for 596,000 of its California customers, affecting 1.8 million people. The company is now in the process of restoring power as wind forecasts have become less severe.

More than 5,000 firefighters in northern California are battling the roughly 76,000-acre Kincade fire, north of Santa Rosa in Sonoma County, with 156,000 people still under evacuation orders. In southern California, the Los Angeles Fire Department is working to contain the Getty fire in Brentwood, which started Monday and has burned through 745 acres.