In the latest regulatory food fight, California voters on Nov. 6 will consider a measure that would require special labels for items containing genetically engineered ingredients. Proposition 37, which a majority of voters favored in a new poll, could have far-reaching implications not just in the Golden State, but across all of adland for food marketers and agencies. Here is a closer look: 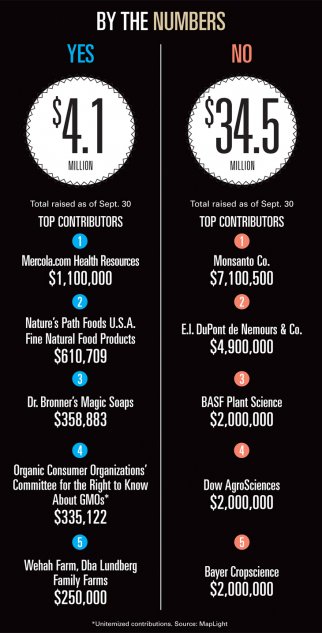 What would it do?

The regulation would require front-of -pack "genetically engineered" labels for raw foods (such as fruits and vegetables) or processed foods made entirely or partly from genetically engineered (GE) ingredients. Roughly 70% to 80% of packaged foods contain such ingredients, including corn, soybeans and sugar beets, according to a Bernstein Research report. The crops are genetically altered for a desired result, such as resistance to pests. Prop. 37 exempts alcohol and prepared or restaurant foods meant for immediate consumption. Also exempt are products of animals fed genetically engineered crops.

Who is for it?

Consumer and public-health groups have been joined by organic farmers and natural- and organic-food marketers such as Amy's Kitchen and Lundberg Family Farms. Adman and activist Alex Bogusky has given $100,000 in support.

Who is against it?

The biggest donor to the No campaign is Monsanto, which sells seeds for genetically modified crops designed to increase yields. Other opponents are big packaged-food marketers such as PepsiCo, Nestle, Coca-Cola Co. and ConAgra, which have donated millions of dollars to the No campaign.

Wait, don't some of these firms market smaller natural or organic food brands?

Yes, Kellogg Co. has Kashi and Coca-Cola has Honest Tea. Prop. 37 supporters have tried to make hay of the fact that the parent companies of these brands are fighting a measure that many of their smaller rivals endorse. Will consumers care? The attention could out the brands as being owned by bigger conglomerates. "Large food companies have gone to great lengths to disassociate their natural/organic brands from their owners," said food-industry consultant Rick Shea.

What will big packaged-food marketers do if the measure passes?

The phrase "genetically engineered" seems scary enough to frighten some consumers. So marketers might just avoid it by changing ingredients. Or as Bernstein Research noted, a "practical solution" may be for packaged-food firms to tap nongenetically engineered sources. Still, with this year's drought, it may be costlier to lure farmers back to non-GE varieties "that have more yield risk," the report said. The No campaign says higher grocery bills will result.

Why should national advertisers care?

California is a massive market and the initiative's passage could lend momentum to similar efforts elsewhere. Retailer compliance could entail setting up perhaps costly record-keeping systems to keep track of sworn statements from producers certifying their goods do not include GE ingredients.

The measure also prohibits the use of the word "natural" in labeling or advertising of GE foods. The California attorney general says it's "possible" this could apply to some processed foods. That would mean if foods are processed even minimally, marketing them as "natural" might be prohibited. This could set a precedent (and cause headaches for advertisers) because the Food and Drug Administration doesn't have guidelines for use of "natural," a pitch for everything from orange juice to peanut butter.

Which side seems to be winning?

The Yes side is ahead in the polls, but the No campaign has more money. The Yes campaign has an easier sales pitch, simply telling voters they have a "right to know" what's in their food. Other nations require GE labeling, including 15 in Europe plus Russia, Japan and China. The No campaign warns of "more government bureaucracy" and lawsuits.