DETROIT (AdAge.com) -- Chevrolet will use next month's World Series to launch ads for the debut of the Volt plug-in hybrid sedan, Automotive News reported today. 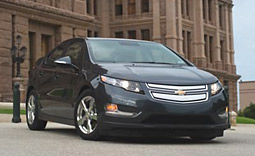 The Volt is being marketed as a 'halo car' to underscore GM's green credentials.
Credit:
Chevrolet
The ads will be part of a broad campaign that Chevrolet will initiate during Major League Baseball's fall classic and run throughout autumn, said General Motors Co.'s marketing chief Joel Ewanick, who spoke on the sidelines of the Rainbow PUSH auto summit in Detroit.

Mr. Ewanick declined to give details of the Volt commercials or the broader Chevrolet campaign. But he said they would remind viewers of Chevrolet's nearly 100-year heritage and the place in American culture that the brand shares with baseball. Goodby Silverstein & Partners is the agency for Chevy.

GM is scheduled to begin production of the Volt for retail sales on Nov. 11 at its Detroit-Hamtramck assembly plant. The Volt is being marketed as a "halo car" to underscore GM's green credentials.

Mr. Ewanick said the next iteration of commercials for the Cruze compact also would roll out during the Chevrolet campaign. The first ads, narrated by actor Tim Allen, attempt to compare the Cruze more favorably to competitors such as the Toyota Corolla.

The World Series campaign will run on TV, radio and across other media, he said. And because of the Chevrolet ad support, Major League Baseball and Fox are also pushing the start of Game Three of the World Series earlier to 6:57 p.m. ET on Saturday, Oct. 30, making it the earliest start to a World Series game since Game Six of the 1987 World Series.

News Corp.'s Fox is carrying the World Series on TV. Mr. Ewanick declined to say what Chevrolet will spend on the ads, but he said he expected Chevrolet to be one of the largest advertisers during the games. GM also plans to resume advertising during the 2011 Super Bowl.