Marketing Chief Perry: 'We're Looking at This as an All-New Launch'
READ THIS NEXT
Jeff Bezos’s wealth soars to $171.6 billion to top pre-divorce record

Chevrolet is launching a full-blown marketing campaign for the re-engineered 2014 Malibu, a bid to jumpstart sales after the previous model year's major redesign failed to resonate with shoppers.

"We're looking at this as an all-new launch," Chevy U.S. marketing chief Chris Perry told reporters in a Detroit media drive attended by Automotive News. "We need to put our investment behind it to make sure we're successful."

Mr. Perry declined to say how much General Motors will spend on the campaign, but said it would be on par with a typical marketing rollout for a next-generation product. Commonwealth is the agency.

The first commercials for the '14 Malibu were broadcast Monday during coverage of the baseball playoffs. The spots use an emotional, family-centered theme that features moms and dads getting their kids off to school, with the tagline: "The car for the richest guys on earth."

Mr. Perry said the launch campaign will run for at least six months.

He said he expects the sedan's improvements to boost the Malibu's market share in the highly competitive mid-sized sedan segment. Through September, Malibu sales fell 14% to 154,950, far behind the Toyota Camry, Honda Accord, Ford Fusion and Nissan Altima.

It's unusual for automakers to launch a broad marketing campaign for a so-called mid-cycle enhancement, which typically comes about three years after the introduction of a redesigned model. For the Malibu, General Motors pushed through the re-engineering two years early, because sales of the mid-sized sedan sagged following its major overhaul in six years. 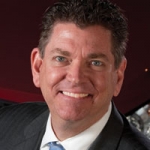 Mr. Perry acknowledged that the hurried re-engineering and relaunch of the Malibu marketing campaign is unusual for GM, but said it reflects a sense of urgency to get products right.

"It's a new General Motors," he said. "We recognize that we need to invest appropriately to be competitive in these key segments."

The updated model includes a "text to voice" feature that converts incoming text messages and reads them over the car's audio system, which Chevy says is a first for a mid-sized sedan. The driver can respond from a list of preset list of responses, such as "I'm driving and will contact you later."

GM launched the redesigned 2013 Malibu with an Eco mild-hybrid model in early 2012, followed by the volume 2.5-liter version in late summer of last year. The car was panned for its scrunched rear seat, mediocre fuel economy and ho-hum styling.

The re-engineered 2014 that arrives in dealerships this week features a new front fascia and improved interior, including revisions to make the back seat roomier. GM also added a stop-start system and other powertrain improvements to boost fuel economy on the base 2.5-liter engine to 25 mpg city and 36 highway, up from 22/34 on the 2013 model.
Mike Colias is a writer for Automotive News