BEIJING (AdAge.com) -- One of China's largest companies, Haier Group, is stepping up its efforts to build a global brand on the scale of Samsung or Sony by appointing an ex-Motorola marketer, Larry Rinaldi, to a new position, global chief brand officer. 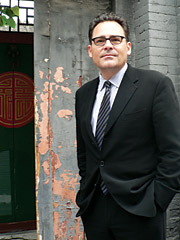 Larry Rinaldi
Haier already has a global manufacturing presence, including a North American headquarters in New York and a plant in South Carolina. Products such as washing machines and refrigerators are sold across the U.S. in chains such as Wal-Mart, as well as in Europe. Haier has also created some popular products, such as a mini-fridge sized to fit a six-pack of beer and a pizza box that has became a hit with college students.

A handful of good products and an international distribution network have helped Haier become a top contender in the race among Chinese companies to build global brands.

Still lagging rivals
But Haier has been losing that race to companies such as Lenovo Group. The Beijing-based computer company adopted IBM's marketing strategy and even hired its ad agency, Ogilvy & Mather, when it took over Big Blue's PC division in 2005. It also retained IBM marketing veteran Deepak Advani as U.S.-based global chief marketing officer and senior VP of e-commerce.

Unlike Lenovo, Haier treats advertising like most other state-run companies do in China. Its marketing staff was tucked into the sales department, it appointed dozens of agencies on a short-term, project basis and campaigns were built around tactical sales promotions rather than corporate branding efforts.

Haier's stuffy corporate hierarchy prevented midlevel marketers from improving the system. They were also hindered by a Confucian culture that promotes harmony and discourages workers from challenging the system or their superiors. As a result the company is known as a "nightmare" client, according to executives at ad agencies working with Haier.

While it doesn't have the strongest brand name, the company has continued to expand its product range. In addition to household appliances, it produces high-end products such as flat-screen TVs, computers and mobile phones.

Seeking a Samsung-like transformation
Now that its product range is starting to look more like Samsung's showroom, Haier wants to re-create its Korean rival's successful image transformation from cheap Sony knockoff to high-tech powerhouse, achieved in part through the efforts of global marketing chief Eric Kim.

After several months of searching for a global marketing head of its own, Haier chose an American with international marketing and agency experience and a strong Chinese background.

Mr. Rinaldi, 52, has run his own agency, O.N.A., in Beijing since 2005, but he first moved to China in 1998, when he was appointed Ogilvy & Mather's vice chairman for greater China. He joined WPP Group sibling Wunderman in 2000 in Europe, returning to Beijing in 2002 as that agency's president-Asia/Pacific, as well as chairman-greater China at Young & Rubicam, a position he held until 2003, when he joined Motorola as Beijing-based VP-chief marketing officer, Asia.

Mr. Rinaldi will continue to live in Beijing, in part to be in the Chinese capital ahead of the 2008 Olympic Games, of which Haier is a national-level sponsor, but he will travel frequently to Haier's headquarters in Qingdao, on China's eastern coast. His three-year contract will begin Dec. 1.

Although Mr. Rinaldi would not comment about his new position, executives at Haier said he has been asked to set up marketing processes and methods now lacking at Haier to help build the company's global image. He will also be in charge of the company's relationships with all of its ad agencies, including Y&R, Japanese agencies Dentsu and ADK, and WE Marketing Group, which is run by former Grey China executives.