NEW YORK (AdAge.com) -- The War on Christmas may be in its final days. 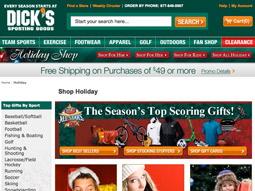 Dick's Holiday Shop
Randy Sharp, director-special projects at the AFA, said that in the past five years the group has seen the percentage of retailers recognizing Christmas in their advertising rise from 20% to 80%. Just eight retailers are left on the group's list of "Companies Against Christmas."

It's also become more challenging to find a large, national retailer to single out for the group's annual boycott. This year, Dick's Sporting Goods, which boasts an online "Holiday Shop," will be the target of the boycott. The AFA is expected to send an Action Alert to its 2.3 million supporters on Friday morning. That alert will urge shoppers to boycott Dick's between now and Dec. 25. It also calls for consumers to email President-Chief Operating Officer Joseph Schmidt and then call Chief Marketing Officer Jeff Hennion. The retailer declined to comment. In the past, Target , Sears, Gap Inc. and Walmart have been targets.

"We've had a complete flip," Mr. Sharp says. "The politically correct holiday verbiage is going away. Companies are getting the message."

Indeed, retailers that have found themselves the target of boycotts or media and consumer scrutiny have responded swiftly in recent years. Lowe's "Family Trees" were renamed "Christmas Trees," while Walmart's "Holiday Shop" is now a "Christmas Shop." Midway through the 2005 holiday season, Target , facing a boycott, announced its advertising messages would become more specific and include references to Christmas. And last year, Gap Inc. responded to a boycott by issuing a press release highlighting the use of the phrase "Merry Christmas" in its upcoming Old Navy ads.

Mr. Sharp stopped short of saying that he was surprised by how quickly and readily most retailers have changed their marketing. But he did point out that, especially in this type of economic environment, retailers are being careful not to alienate customers.

"Shoppers vote with their wallets every day," said Ellen Davis, a VP at the National Retail Federation. "[When it comes to boycotts,] retailers realize, 'It could just as easily have been us.'"

The NRF does not formally advise retailers on whether they should use the word Christmas, but Ms. Davis said it does provide statistics. This year's NRF/BigResearch survey found that 91% of consumers plan to celebrate Christmas, compared with 5% for Hanukkah and 2% for Kwanzaa.

"Retailers dipped their toe into the Christmas waters again last year, and there wasn't much push back. There wasn't a huge outcry from groups offended that retailers were saying Merry Christmas," said Ms. Davis. "We see the word Christmas being used much more this year than three or four years ago. The pendulum seems to have swung back."

The "extreme backlash" to generic holiday messaging likely caught retailers off guard in years past, Ms. Davis added. Now, phrasing around the holidays is much more strategic. "At this point, it's a conscious decision. It's not just whimsical phrases being tossed around in the marketing department," she said. "These are conversations that are now probably taking place in the C-Suite."

Retailers certainly tread carefully when it comes to the subject of Christmas. Major retailers such as JCPenney and Target said they don't have formal policies on in-store greetings. And retailers ranging from Gap to Macy's and RadioShack to Sears emphasized their inclusion and respect for shoppers of different beliefs, while noting that at least some of their marketing messages include the word Christmas. RadioShack, however, still appears on the AFA's list of "Companies Against Christmas." A RadioShack spokesman declined to comment on that distinction.

Plenty view the tactics of the AFA and other groups as bullying, but Mr. Sharp rejects that. "It's not bullying, it's consumer advocacy," he said. The AFA's stance is that retailers should not profit from Christmas, if they refuse to clearly acknowledge it. "When your advertising has trees and ornaments and gift wrapping, you're advertising Christmas, so don't call it holiday," Mr. Sharp said, adding that the group is not at all offended by Happy Hanukkah messages.

Company refers to "Christmas" infrequently or in a single advertising medium.

Company may use "Christmas" sparingly in a single or unique product description.