In an Interview, Chrysler Chief Talks About a More Masculine Fiat, Plans for the Super Bowl and Being 'French Normal'
READ THIS NEXT
Trio of advertising, marketing and publishing vets open media and entertainment company

Brand-building is in the past at Chrysler. Through the automotive economic tumult of the past two years, the company has come back from the brink of death. Product-building is now its priority.

So maintains Olivier Francois, Chrysler's chief marketing officer and global chief of the Fiat brand. "So far we've been speaking about who we are," said Mr. Francois during an interview at the North American International Auto Show in Detroit. "Now we have to speak about what we make." 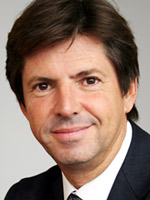 First on the agenda for Mr. Francois and Timothy Kuniskis, the newly appointed head of Fiat brand sales and marketing for North America, is mending Fiat's disappointing debut year in the U.S. The Fiat 500 notched only 19,769 units sold, according to Automotive News' DataCenter.

"There is now no excuse, the brand's brief was wrong, and all the responsibility lies here," Mr. Francois said. "Soon we will have the sporty masculine version [the Abarth] that we missed because we were tucked into the feminine DNA of the 500."

So was Fiat marketed as a chick car?

"The communication could be that it's a chick car, and it could be that , if we don't come off it quick," said Mr. Kiniskis. Referring to last fall's polarizing campaign starring Jennifer Lopez cruising New York City streets in a Fiat convertible, he said, "If you come off the JLo stuff too soon -- we all liked it -- people will say we made a mistake, which we don't think we did. But if we wait too long, it could become a chick car. Luckily we have the Abarth, which gives us an excuse to transition."

One of Fiat's major problems -- which led to the resignation of Laura Soave, Mr. Kuniskis' predecessor -- was the slow rollout of dealerships nationwide. Chrysler CEO Sergio Marchionne said in November that the distribution network "is probably half a year late." Mr. Francois said the network is almost complete, with 137 dealers in place.

As Ad Age has reported, there were some marketing snafus in 2011, including a failed relationship with Impatto, a boutique agency on Southfield, Mich., that Ms. Soave hired. Currently Doner does creative for the brand.

With the Super Bowl less than a month away, Mr. Francois, a native Parisian who leans heavily on his salesmanship and charm ("I'm a good dude," he said, smiling. "I'm normal. French normal."), has not decided on the content for Chrysler's 60-second buy. He has a tough act to follow: Last year's "Imported from Detroit," a two-minute Motor City-centric ad featuring music from Eminem, emerged as a classic of the storytelling form.