From Ikea to Zipcar to Walmart, Advertisers Follow Consumers into Metropolitan Areas
READ THIS NEXT
Trade Desk shares tumble 25% after Q1 earnings report

Decades ago, people left cities for the suburbs to raise families and to live the American dream. Now we're seeing "bright flight," younger, educated Americans reversing the trend seen in their parents' and grandparents' generations.

Consumers, from yuppies to artists to homeowners unable to sell homes to empty nesters, are clustering in urban areas more than ever before. And marketers stand to benefit from it.

"We're experiencing worldwide the fastest urban boom in history," said Ann Mack, director-trendspotting at WPP's JWT. "As the U.S. population gets more urbanized and cities boom, improving human environments will become a higher priority. We'll see a flourishing of opportunities for brands across multiple categories and initiatives aimed at improving local environments, adding beauty or helping to bring communities together."

According to the U.S. Census, from 2000 to 2010, the nation's 366 metropolitan areas picked up nearly all population growth: 92.4%. The overwhelming majority, 84%, choose to live either in or in the vicinity of a city of 50,000 people or more. In fact, almost 100 million Americans, 32%, choose to live in one of the 15 largest metro areas, each of which has more than 4 million residents. The 50 largest metro areas are home to 53% of the nation's residents, and all of them except five grew over the past decade.

The 2000 Census found 105.5 million occupied housing units, of which 32.8 million or 31% were in central cities. By 2010 that had crept up to 33%, despite the significant late-decade falloff in household creation. And even among first-time homebuyers, Ms. Mack said that 77% say they want to live in an urban area.

Among the sectors seeing opportunity in urbanization are furniture manufacturing, automotive and retail.

Ikea, long known for its apartment-friendly, affordable furniture, has of late been emphasizing its small-space furniture. "The small-space focus has been a global initiative within Ikea, as many Ikea customers worldwide live in smaller, urban areas" said Janice Simonsen, U.S. design spokeswoman for Ikea. She added that the focus on small also "resonates with U.S. customers. Although historically U.S. homes tend to be larger, our customers are looking to use these spaces smarter and more efficiently."

Even so, Ikea stands to benefit from an influx of urbanites in the rental market -- a healthy market in the wake of the housing crisis -- looking for apartments and affordable furniture. Walter Molony, spokesman at the National Association of Realtors, said that vacancy rates for rental units are declining as young people or people uncertain about home ownership rent more and seek roommates. According to the Census, 34.9% of occupied homes nationwide were rented in 2010, up from 33.8% in 2000.

Ikea's doing something right. Sales rose nearly 8% worldwide in fiscal 2010 and are similarly brisk this year. 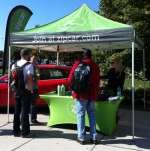 By reaching students now, brands such as Zipcar hope to stay top of mind in the future.

And in cities, rentals have been going beyond homes and apartments to cars. "There's a trend of people leasing more than buying outright," said Stephen Hahn-Griffiths, chief strategy officer at Leo Burnett. Zipcar, which had its IPO earlier this year but was founded in 2000, is one of the bigger car-sharing services around. It posted a 34% gain in revenue to $61.6 million compared to $46.0 million in the prior year period, for second quarter 2011. During that time, membership increased 29%.

Although car sales in the U.S. were up 6% in the first nine months of 2011 over 2010, according to Automotive News, that doesn't mean car-sharing services, which are more popular in cities, are in trouble.

"In urban areas, people -- especially millennials -- want to find practical solutions that are affordable. They're more environmentally aware than previous generations and they're keen on saving money," said Ms. Mack. She added that if Zipcar is going to feel competition from anywhere, it'll feel heat from similar car-sharing companies, such as I-Go and rental companies like Hertz, which expanded to car-sharing in Manhattan.

Not wanting to miss out, some car manufacturers are taking a more proactive approach. General Motors in 2012 will team up with RelayRides, which lets car owners share their cars with neighbors. RelayRides will use GM's OnStar to allow borrowers to unlock the cars from their mobile phones.

Mr. Griffiths said he expects the rental trend to continue beyond cars and apartments. "I would even expect to see an increase in furniture rental."

Retailers typically known for massive stores are even rolling out smaller formats fit for urban areas. Walmart is rolling out dozens of smaller stores in an effort to fight lagging sales. The chain took its Neighborhood Market grocery format and renamed it Walmart Market and began opening the stores in denser urban areas like Chicago. As of this year, the smaller grocery outposts account for about 200 of Walmart's approximately 4,400 U.S. stores. At the same time, it's working on Walmart Express, a convenience-store format that 's even smaller.

William S. Simon, exec VP, president and CEO for Walmart's U.S. division, in a recent earnings call said that the company's neighborhood markets have posted positive same-store sales for 15 consecutive months and that the "Neighborhood Market format is delivering a return at the same level as our Supercenters, which have the best ROI in the company." He added that 180 more are in the pipeline.

Other downsizing retailers include office-supply chain Staples, which this summer said it planned on opening new stores that were about 15,500 square feet, down from the current layout of 18,000 square feet. Best Buy is looking to downsize its current stores, subleasing parts of its space to other retailers.