Suit Charges P&G Tried to Shift Blame to Parents
READ THIS NEXT
Lagy Gaga's Oreo collab predicts a brighter 2021, and the Super Bowl is selling out slowly: Thursday Wake-Up Call

BATAVIA, Ohio (AdAge.com) -- Parents who claim their babies got severe diaper rash from Pampers Dry Max diapers have sued Procter & Gamble Co. in U.S. District Court for the Southern District of Ohio seeking to create a class action and anticipating more than $5 million in damages. 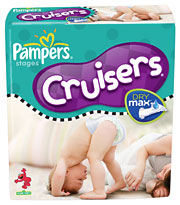 The law firm Keller Rohrback, which late last week put out a statement saying it was investigating claims of diaper rash and chemical burns from Pampers Dry Max diapers, earlier today filed its second of two lawsuits against P&G. The first was filed Tuesday.

The suits cite cases of diaper rash, sometimes severe, among babies diapered in recent months with Pampers Swaddlers or Cruisers diapers with the Dry Max technology, which P&G claims in ads is 20% thinner and twice as dry as Huggies Little Movers diapers from Kimberly-Clark Corp. While the complaints don't directly cite reports from physicians, one cites the opinion of a father of one of the babies, a "clinical pharmacist," that his child's rash "looked like a skin reaction to some sort of chemical."

In another case, the complaint notes a baby who had a rash after first using a Dry Max diaper in March, after which her mother discontinued use of the Pampers product and a new food that had been introduced. Six weeks later, after her daughter had run out of another brand of diapers at day care, the center called the mother, receiving permission to use an old stock of Dry Max diapers, after which the child immediately developed a much more severe rash, according to the complaint.

Subsequent efforts by P&G seek "to shift blame to parents" for the rashes, according to the complaint, "implying that [the parents] fail to change their children's diapers with sufficient frequency." The complaints accuse P&G of material omissions, misrepresentations and breaches of warranty in connection with marketing the diapers.

In a statement, P&G said, "Intensive safety assessments, clinical testing, and consumer testing before, during, and after the launch shows that Pampers Dry Max is safe and does not cause severe skin conditions. Further review by pediatricians, pediatric dermatologists, and children's public-health-risk experts confirm these findings. While we have great empathy for any parent dealing with diaper rash -- a common and sometimes severe condition -- the claims made in this lawsuit are completely false."

P&G said diaper rash affects more than 2.5 million babies, or one in four, at any given moment, and 250,000 cases typically are severe. "To attribute these conditions to the Dry Max disposable diaper is incorrect and misguided," the company said. "Although some attorneys may wish to profit from rumors and misinformation, the Dry Max product is completely safe and does not cause skin irritations. We have every confidence that we will prevail in this meritless lawsuit."

The lawsuits follow a spate of mainstream media reports about the diapers last week, which appear to have slowed since P&G took a tougher tone in denying accusations in social media about the products. The main Facebook page for critics of the Dry Max products has grown to more than 7,100 members, but the growth rate there also has slowed since last week.