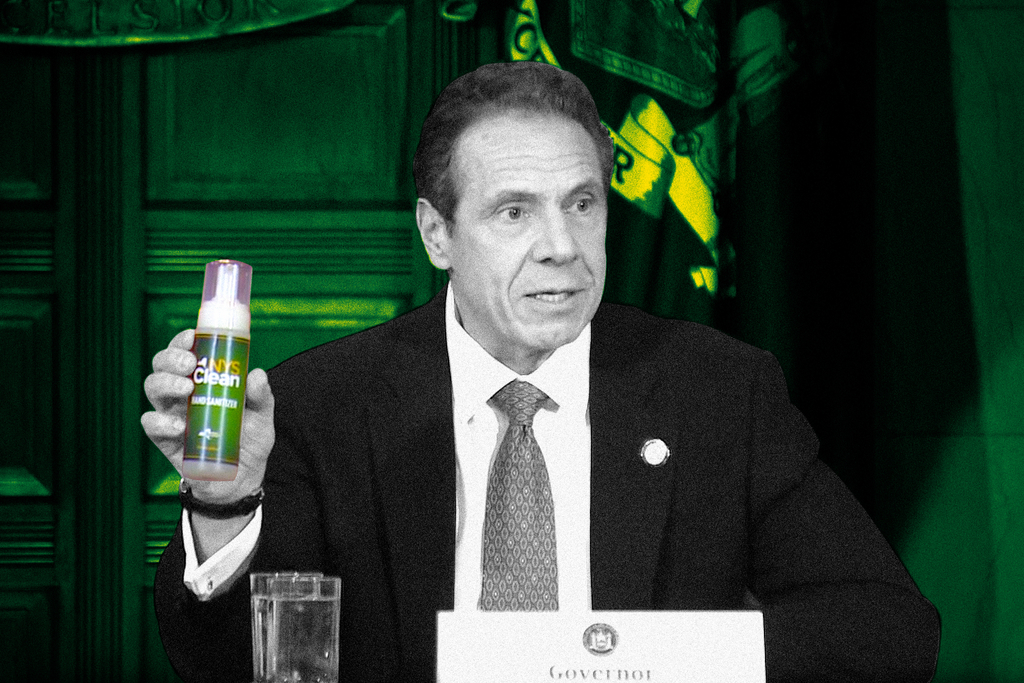 I’m in a New York state of clean

“It comes in a variety of sizes and has a very nice floral bouquet,” said Andrew Cuomo as he rubbed it on his hands and brought them to his nose. “I detect lilac, hydrangea, tulips.” That’s the New York state governor at a press conference yesterday “demonstrating” the hand sanitizer that the Empire State is ready to release to thwart price gouging by sellers of commercial brands like Purell, writes Ilyse Liffering. "You can’t get [hand sanitizer] on the market and when you can, it’s very expensive,” said Cuomo in announcing the product called NYS Clean. “To Purell, and Mr. Amazon and Mr. eBay, if you continue the price gouging, we will introduce our product, which is superior to your product,” said Cuomo. “And you don't even have the floral bouquet.”

The coronavirus continues to alter daily work life, with a multitude of companies taking major steps to prepare for worst-case scenarios. Coca-Cola is asking all of its employees at its Atlanta headquarters to work from home today so that it can “conduct a large-scale preparedness drill,” a spokeswoman told Ad Age. “This is simply a drill to evaluate our business continuity plans and ensure that we would be able to operate effectively if we should ever need to close our offices at any time in the future,” she stated in an email, noting that “we do not have any cases of COVID-19 (coronavirus) at our headquarters.”

Hershey Co., meanwhile, is “discouraging participation in large group meetings internally and externally until further notice,” according to a spokesman. And plenty of companies are tightening their travel policies. Ford, for instance, has restricted all travel, both foreign and domestic, until April 17.

General Mills has restricted all business travel to Italy, mainland China, South Korea and Iran. It says any other travel should be limited to business essential work, and when possible, meetings should be virtual or postponed. Fiat Chrysler Automobiles “has instructed its employees that travel should be pre-approved by a member of the leadership team including both domestic and international trips,” according to a spokeswoman.

‘A rough couple of days’

More industry events are adjusting their plans. Cannes, slated for June 22-26, is continuing with its schedule but weighing a contingency plan to postpone the event until October, according to two people familiar with the situation. A+E and AMC Networks are also scrapping plans to host their upfront dog and pony show on March 25 and will instead will hold a virtual upfront the week of March 23, reports Jeanine Poggi.

Advertising Week Europe, due to take place Mar. 16-19 in London, announced this morning it had "made the difficult decision" to postpone to Sept. 14-17, 2020 due to coronavirus.

It was also announced yesterday that The One Show will be held entirely online. The One Club’s ADC 99th Annual Awards, Young Ones Student Awards and accompanying Creative Week events will also be streamed for audiences, writes Ann-Christine Diaz. CEO Kevin Swanepoel says the decision was made after an emergency board meeting, and adds that when various jurors were informed of the decision, “We got so many emails of relief from people around the world saying 'thank you' as they were afraid of traveling." He added, “It’s been a really rough couple of days.”

Wingstop has cooked up a way for its fans to make a little extra money: working as the chain’s walking billboards. It’s giving away sweatshirts as “wearable billboards,” and when someone puts one on and posts a photo on Instagram, they will get $10 deposited into their Venmo account. More creative posts could lead to bigger prizes. Wingstop is putting its entire national out-of-home budget into the project in the first half of 2020, Jessica Wohl reports. By Monday afternoon, the hoodies were gone.

Panera Bread, which has worked with Anomaly since 2014 on its clean food positioning, has “amicably parted ways” with the agency, according to Chief Marketing Officer Chris Hollander. The marketer is now running a push from Goodby Silverstein & Partners, which has created a commercial for the chain’s $8.99 a month coffee subscription. The theme is “your cup is always full.” According to Panera, the average American spends more than $1,100 annually on coffee, writes Jessica Wohl.

Build your own: In this week’s Brand Playbook (subscribers only) Adrianne Pasquarelli looks at how and why retailers are building their own media networks. Such businesses create “really interesting opportunities for marketers who want a clear line of sight to how they’re reaching customers and a clear line of sight to those customers,” says Jason Harrison, CEO North America of Essence, a media agency that does work for Target, which runs a media network named Roundel.

New chapter for Story: Macy’s has decided to close 16 of the 36 Story shop-in-shops it had opened only a year ago. Adrianne Pasquarelli looks at the factors in the decision to shutter some of its rotating-brand concept shops, and explains how Macy’s hopes to retell Story with a bigger focus on making it more of a gift destination. Read more here (subscribers only).

Here comes Peter Pigtail: It’s getting tougher to find bright stories amid the virus news, but we finally located one. Cadbury has chosen 10 finalists to be the “new” Cadbury bunny, and none of them are rabbits. Online voting goes until March 18 where the public can select the winner from a grouping that includes a pig named Ducksong, a dog with a wheelchair called Lt. Dan and our personal favorite, Conswala the Llama. Now, this is one election we can get behind.