Plans to Connect With Consumers Via Operational Marketing and Social Media, Focus on Multicultural Efforts
READ THIS NEXT
Jeff Bezos’s wealth soars to $171.6 billion to top pre-divorce record

"There was a period when our company did lose its way," he said. "We were too internally focused and not focused enough on the changes taking place with our consumers and customers. In essence, we were too busy looking at the dashboard and were not sufficiently paying attention to the world outside of our windshield."

We live in an 'ADD economy,' said Joe Tripodi, chief marketing and commercial officer, Coca-Cola, at a 2020Vision meeting last week.
While Coca-Cola remains the dominant beverage company in the world, and controls nearly 51% of the global carbonated soft-drink business compared to Pepsi's 22%, according to Beverage Digest figures, it had, perhaps, been too focused on soft drinks at a time when other beverage categories were on the rise, said Bill Pecoriello, CEO at ConsumerEdge Research. "They were too inward thinking and missed a lot of trends that were happening," he said. "There was a shift away from certain beverages and needs being filled by alternative beverages."

Certainly, soft drinks remain a key focus for the company, but now it has also established dairy beverages as a global platform, with brands such as Vio and Minute Maid Pulpy Super Milky, and has set juice as its top priority after sparkling beverages. It's also put more emphasis on innovation, with its venturing and emerging brands group, of which brands such as Zico, Honest Tea and Illy are a part.

Globally, Coca-Cola says it leads in sparkling, juice and juice drinks, ready-to-drink coffee, tea and active lifestyle, or enhanced waters. It is No. 2 in sports drinks and No. 3 in packaged water, which includes plain bottled water and bulk water, categories where there is stiff competition from the likes of Gatorade and Nestle Waters.

John Sicher, editor and publisher of Beverage Digest, also points out that between 2000 and 2004, when former CEO Neville Isdell arrived, the company struggled with management changes and simply wasn't functioning well. "Today, in my view, Coke is really back to functioning at a high level again," he said. "Relations with bottlers are good. There's good morale inside the company. They're recruiting good people and not losing people anymore. They're really now focusing on the business and the brands."

Future priorities
Indeed, the marketer now seems to have its priorities straight. At its 2020Vision meeting last week with analysts and journalists, Coca-Cola laid out goals within the areas of profit, people, portfolio, partners, planet and productivity. Key priorities include doubling system revenue to $200 billion in 2020 from $95 billion last year. And Coke plans to more than double the numbers of servings of its products -- water, soft-drinks, juices and the like -- consumed per day to more than 3 billion.

Coke pulled out all the stops at the meeting, its first such confab since 1998. There was a dinner designed by Linton Hopkins, named one of 2009's best new chefs by Food & Wine, using Coca-Cola as a key ingredient; a sampling of Coca-Cola's foreign beverages; and tastings from its Freestyle fountain, which boasts more than 100 beverage varieties. But underlying the discussion of new products, pricing, targeting, marketing and media approaches was a common theme: putting the consumer front and center.

From a marketing perspective, Mr. Kent said the company will focus on working across many geographies, cultures and channels, targeting the right consumers in a fragmented media environment and innovating. "People are demanding more and more for their time and attention. People need to be constantly entertained now, [it's an] ADD economy," said Joe Tripodi, chief marketing and commercial officer. "We're changing fundamentally from being TV commercial producers to content developers. ... We're leading a new and unique approach ... from purely mass marketing to one-on-one marketing."

To that end, marketing executives highlighted plans to be relevant locally while scaling globally. Those plans ranged from eliminating agency duplication to creating a single World Cup campaign to introducing new, global packaging for its juice brands. Efforts to better connect with key consumers, including teens, moms and multicultural consumers, were also detailed. And the marketing team touted its focus on experimenting with new media, such as digital billboards, social media and in-store advertising, while affirming its intent to continue creating high-profile TV campaigns.

Those plans, laid out by the company's top marketers, were well-received by analysts, who recognize that better segmenting media and scaling campaigns globally will eventually boost the bottom line. "Investors want to see how they're going to [achieve the growth they've projected]," Mr. Pecoriello said. "Marketing efficiency is one of the contributors to that. Marketing dollars are such a big part of their cost structure that leveraging marketing dollars is key to their profit growth."

Global scale, local solutions
Scaling globally while being locally relevant was a recurrent theme, highlighted by both Mr. Tripodi and Wendy Clark, senior VP-integrated marketing. They cited it as a reason for eliminating duplication from its agency roster and focus, to some degree, on agencies that can produce global content. Ms. Clark said the company's roster of creative shops has now been cut to 46 agencies from 82, and there are plans to trim further to about 35 shops. Ms. Clark said that the company previously trimmed its media-agency roster and will soon begin paring back its digital, design and promotion agencies.

"Our ambition wasn't to get to a set number. Our ambition was to get to a more effective place for our company," Ms. Clark said. "What we have is an ambition to scale and eliminate duplication where it makes sense and then have local support and agencies where they make sense. Where we need more customized or localized solutions, that will be in place."

Executives also touted an estimated savings of $45 million on the FIFA World Cup 2010 marketing effort. For the FIFA World Cup 2006, Coca-Cola had two campaigns, as well as a number of local executions. In 2010, a single campaign will be used by more than 100 markets. "Do the math between those two approaches, and you very quickly get to a very conservative estimate of $45 million in cost avoidance," Ms. Clark said. "Creating effective marketing at a local level in the absence of global scale can lead to huge inefficiencies."

Ms. Clark said that the money being saved through the company's productivity efforts are being reinvested in the business, if not specifically marketing. 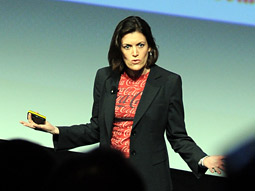 Wendy Clark, senior VP-integrated marketing, estimated that Coke will save $45 million by using a single FIFA campaign in more than 100 markets next year.
Improving connections with consumers was a refrain of all of the marketers at the event. Mr. Tripodi touted "operational marketing," of which in-store marketing is an example, as essential to making a connection. "Our view on consumer connection now has to include not only earned media and PR but all the way into the store and shelf," said Ms. Clark. "One hundred forty million people watch the top 10 TV shows in the U.S. And there are 140 million people that go into Walmart stores each week. Is Walmart a media channel? Yes. You have to include in-store activation in your connections thinking to create value for them and build brands." (One place where valuation seems to be at issue is Costco; AP reported last week that the chain had dropped Coca-Cola products over a pricing dispute. "We don't comment on ongoing negotiations," said a Coke spokeswoman, adding, "Costco is an important customer and our system team is working hard to resolve this situation. We are committed to working with our customers.")

Meanwhile, Katie Bayne, chief marketing officer of Coca-Cola North America, highlighted packages as one way Coke is better connecting with teens and moms. Coke's new 99-cent, 16-ounce bottle was a logical introduction, she said. After all, teens have $158 billion of disposable income annually and they're spending a lot of that on 99-cent downloads. And for moms, there's the 90 calorie mini-can hitting markets in the first quarter. "She's busy and needs that 90 calories of energy," Ms. Bayne said.

Multicultural plans
But the most significant changes appear to be in the multicultural space, which Ms. Bayne said will be a core focus for the company in the U.S. by 2020. Already, multicultural consumers account for 33% of all of Coca-Cola's U.S. volume, and given the population growth occurring in this country, by 2020, those consumers will make up 40% of U.S. volume.

"Our multicultural plans are now 12-month plans. It is no longer Hispanic heritage month followed by Cinco de Mayo," Ms. Bayne said. "We have a deep connection through the World Cup with Hispanic males and through the novelas with Hispanic females."

The company is also embracing a 12-month strategy for African-American consumers. "We're really focusing on moms. Moms lead the decisions in this segment of the population, even more than others, so we're really focusing on her," Ms. Bayne said. "Also, [we're] celebrating the historically black colleges and universities, Black History Month and connecting over music."

The brand is also recognizing the power of consumer-generated content and social media. "Among Coca-Cola's most powerful differentiators are the stories only our brand can tell," said Ms. Clark. "But we're not the only ones that can tell our story. Much of our content comes from our consumers. It's the phenomenon of social media. Consumers remind us daily that Coca-Cola is actually their brand, not our brand." To that end, the company is launching Expedition 206, an ambitious global social-media push.

While it's not entirely clear what the return on the program will be, Adam Brown, director-digital communications and social media, said the company will be monitoring fan participation and online share of voice, as well as increases in friends or followers. "One of the great things about digital and social-media programs is the ability to measure just about everything. This is critical for us to demonstrate ROI on an exciting and, in a way, experimental project like this," he said. "I also think content sharing is a critical metric to watch. ... That third-party credibility is magic."